William Wyler directs this overwrought morality play. It’s a police classic that by today’s standards appears to be much like a typical TV cop show, for example NYPD Blue, though during its time was daring in its realistic snapshot of street-life. It is based on the Broadway play by Sidney Kingsley (he also wrote Dead End); the stagy film’s best asset is the good looking set. It enabled cinematographer Lee Garmes to use his inventive dolly to shoot the film in the studio in a little over five weeks. This was fast for Wyler, whose M.O. is based on directing by the “do it again principle.” In this film Wyler got fast takes after rehearsing the experienced cast for two weeks prior to shooting. Lee Grant, Joseph Wiseman, Horace McMahon and Michael Strong all played the same roles as they did in the Broadway play. This was Lee Grant’s film debut, where she played a nervous purse-snatcher. No music was used.

The police drama covers twenty-four hours in Manhattan’s 21st Precinct detective squad room, which is headed by a straight-shooting Lt. Monaghan (Horace McMahon). Ace detective Jim McLeod (Kirk Douglas) is a hard-nosed gung-ho detective, who strong-arms suspects and is relentless in getting a conviction no matter what. He doesn’t believe in coddling criminals, and doesn’t believe in giving any criminal a break even if circumstances call for cutting some slack. His narrow way of looking at the world becomes the film’s focus, and leads to his Greek tragedy-like downfall as he is engulfed in all the evil around him that drives him over the edge. McLeod has an almost completely unwholesome self-righteous pose which makes him vulnerable for what he doesn’t know about his wife Mary (Eleanor Parker). Before she met him, Mary went out with married gangster Tami Giacoppetti and was pregnant by him. Mary took care of the problem by secretly seeing the abortionist Karl Schneider (George Macready), a slimy ex-doctor that McLeod was trying to arrest for the past year ever since the abortionist beat a murder rap. McLeod arrests Schneider but has to let him go when one witness was bought off (Gladys George) and refuses to identify him and the other witness dies in the hospital after her abortion. But before Schneider is released, he needles McLeod and gets roughed up. Schneider’s mouthpiece (Warner Anderson) threatens to bring charges against the cop, claiming he had a vendetta against his client because of his wife. Monaghan will conduct an in-station investigation and find that McLeod’s wife kept that incident from her hubby. When McLeod finds out all this startling news his jaw juts out and he goes into an hysterical rant, calling his wife a tramp and then giving conflicting speeches that he’s sorry and then not sorry about what he said. This family stain on his crime crusader’s armor results in his wife leaving him, which becomes too much for him to bear. By the end of the night-shift he walks into an escaping hoodlum’s gunfire without caring if he dies. McLeod has built his whole life hating his father and is left with no forgiveness inside him, but dies with his heart softening for his wife and one of the youngsters he arrested.

There are several other criminals in the squad room under arrest, who spice up the story with their subplots. First-time offender Arthur (Craig Hill), an embezzler, is harassed by the cold-hearted McLeod, despite his partner (William Bendix) urging leniency because the youngster reminds him of his dead navy hero son. But Arthur’s best hope is that a sweet girl (Cathy O’Donnell), who stays with him in the squad room, offers her unconditional love. There’s also two character career burglars (Joseph Wiseman & Michael Strong) who bring about exaggerated comic antics until one of the burglars, a four-time loser, turns homicidal. 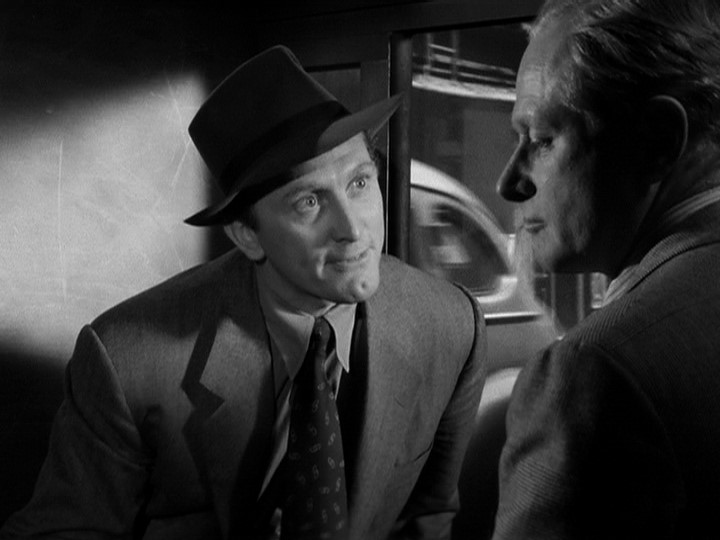