Night Tide was filmed on a $75, 000 budget. Director-writer Curtis Harrington (“Ruby”/”The Killing Kind”/”Queen of Blood”), an avant-garde filmmaker, in his first feature helms this romantic fantasy. It borrows its title from Poe and its moody filming style from Kenneth Anger and has the dreamy look of a Val Lewton horror pic.

Lonely young sailor Johnny (Dennis Hopper), from Denver, is on shore leave in Venice Beach and picks up in a jazz bar Mora (Luana Anders), who works in an amusement park in a sideshow exhibit as a mermaid at the Santa Monica Pier. Ellen Sands (Luana Anders), who works for her grandfather at the nearby merry-go-round, informs him that two men have died mysteriously shortly after dating her. Mora tells Johnny that she’s dangerous because she’s a real mermaid. Her boss, Captain Sam Murdock (Gavin Muir), tells how he adopted her as an orphan child from the Greek island of Mykonos and raised her with the belief that she’s really a mermaid who will one day return to the Sea People. Mora believes like the sirens from myth, she will lure anyone who loves her to his doom. There’s even a mystery woman who follows Mora when she’s with a man and puts a scare into her.

The innocent sailor is haunted by the attractive mystery woman, and tries to make sense out of what he’s hearing. In one dream sequence he sees Mora becoming an octopus as they kiss. The undaunted Johnny can’t believe such hokum about her and goes skin-diving with Mora under a full-moon. When Mora tries to remove Johnny’s air hose, he escapes and she disappears only to turn up later dead but dressed in her mermaid costume in the large water tank at Sam’s exhibit.

The ambiguous ending lets the viewer decide for themselves what happened to Mora. In other-words, it’s up to each viewer to decide whether she took her own life or did Sam kill her as he confessed to the detectives to keep her for himself. That was the same reason he confessed to also killing the two boys, out of his fear of losing the only one he loves.

As a chiller, it’s top-notch. 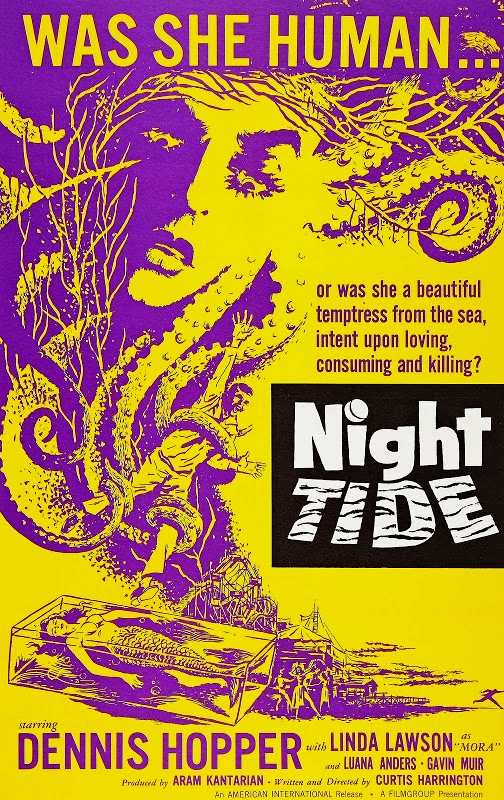