“It passes the giggle test as a splendidly opulent parody of period trysts.”

The stylized campy hysterical melodrama is written and directed with an amusing tongue-in-cheek wit by the team of Stewart Main and Peter Wells (“One of Them!”). It’s set in the 19th century New Zealand remote mythical colonial seaport of Hope. The pic is noteworthy for its fabulous sets (designed by Shane Radford) and loud opera music (Verdi and Berlioz).

The beautiful bisexual wealthy draper, Jennifer Ward-Lealand, lives in luxury with her doting assistant Lisa Chappell. She frets about the well-being of her pregnant younger unmarried sister, Kiri Mills, who is addicted to sex and opium. The drug habit was brought on through sis’s romance with the sinister fortune hunter drug-dealer Cliff Curtis. Therefore as a remedy Jennifer hires the broke but handsome immigrant stranger, Kevin Smith, to marry her sister and to bribe Cliff with jewels to let her sis go. In return the immigrant will receive a tract of land. Things get more complicated when Smith also desires Jennifer in the bargain, even though she wants no part of him. Jennifer is happy to be with her assistant. But for politically correct social reasons she is engaged to the nasty local politician Michael Hurst, who is after her money. It seems desperate remedies are needed to solve all of Jennifer’s big problems.

Despite its choppy execution of its inane storyline and its trite dialogue, it passes the giggle test as a splendidly opulent parody of period trysts. It also shows its kitsch off with elaborate period costumes, an over-baked plot and its dim ambitions of being a mock 1940’s Hollywood soap opera epic. It might not be a particularly good film, but it was highly entertaining and has received a cult following in the so-called gay community. 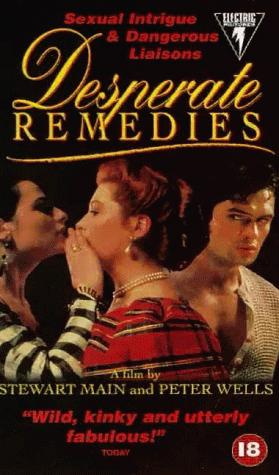