Rainer Werner Fassbinder (“Fear of Fear”/”Whity”/”Lili Marleen”) directs this unpleasant but thoughtful and provocative psychodramaset in Berlin, in the 1930s. It’s based on a novel bythe Russian author Vladimir Nabokov and is co-written by English playwright Tom Stoppard and Fassbinder.The curio is in English even though the German filmmaker doesn’t speak the language and the British star Dirk Bogarde does not speak German. Nevertheless, both actor and director have said they found no problem communicating.

Hermann (Dirk Bogarde) is an aging Russian émigré living in the Weimar-era in the 1930s, who is a small-time manufacturer of chocolates in Berlin. He lives with his sensual but moronic zaftig wife Lydia (Andrea Ferreol), who is having an affair with her cousin Ardalion (Volker Spengler). He’s an obnoxious redheaded obese bohemian artist, with no talent.

Hermann feels a mid-life crisis coming on and also despairs about the chaotic political climate giving rise to the brutal Nazis, especially since he’s half-Jewish.Believing there’s nothing more to expect out of life than his material comforts and living out a petit bourgeois life, Hermann embarks on a path of madness. He devises a scheme where he takes out a life policy on himself with insurance man Orlovius (Bernhard Wicki) and gets struggling drifter Felix (Klaus Lowitsch), whom he thinks looks like him, to be his double and murders him in the country. Hermann takes over Felix’s identity, but the police establish the corpse is not that of Hermann. When they identify the victim, they go to Switzerland to nab the insane Hermann.

The film’s problem is that Hermann’s scheme is too loony to create much further thought and the downer ending was too plodding and carried out in such a mechanical and tiresome way. But despite its irksome traits, it still carries with it the weight of Fassbinder’s anarchy of the imagination, Stoppard’s catchy dialogue, a witty performance by Bogarde and the macabre underhanded comedy that’s subversively more stinging than funny.

The pic is dedicated to AntoninArtaud (French playwright, poet, actor and theatre director, who was a troubled creative genius who spent most of his life in asylums and was addicted to drugs), Vincent Van Gogh (Talented Dutch post-Impressionist painter, who suffered from mental illness and died at the age of 37 from a gunshot wound), and Unica Zurn (German author and painter, who lived in Paris and wrote as a surrealist about her depression and committed suicide in 1970). 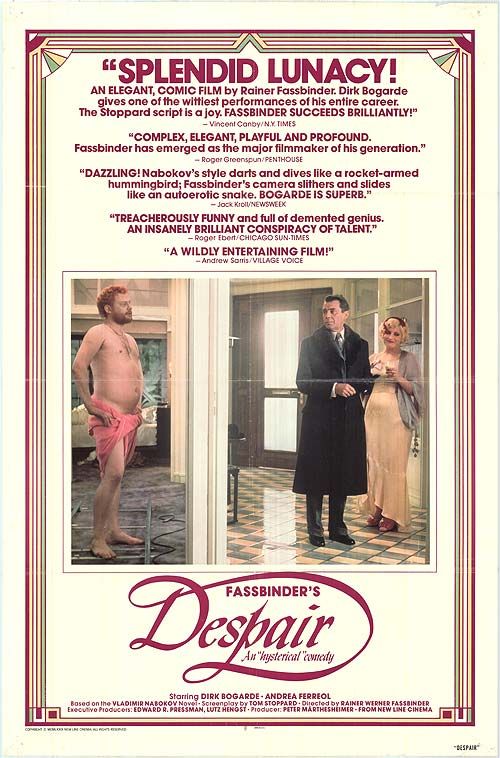