Dull war pic. It tries too hard to sell that one can overcome their Quaker pacifist upbringing and fight if it’s a just war. Director Rudolph Maté (“Miracle in the Rain”/”The Far Horizons”/“The Violent Men”)does a good job with the visuals, but a lousy job with the dramatics. It’s in the deep six because of the strident dialogue, wooden acting, cliche wartime military characters and lame comedy.Harry Brown adapts his screenplay from the novel by Martin Dibner. Fading star Alan Ladd, looking puffy and old, put up his own dough to produce with his independent company this uninspiring formulaic Navy drama. Six years later suffering from depression and becoming an alcoholic and alienated by rumors that he’s a closet homosexual, he died at age 50 from an overdose of dope and liquor.

Alec Austen (Alan Ladd) is a Madison Avenue commercial artist and playboy, who has a swell beachfront house on Long Island. He lures his art director boss Susan Cahill (Dianne Foster) to a dinner date at his favorite Basque restaurant and then entertains her in his nearby beach house. He next takes her to visit his Quaker mom (Jeanette Nolan) in Pennsylvania and tells both he was called to active duty for WWII as a Naval reservist, because he was in his college’s ROTC program. Mom is a conscientious objector, but realizes she can’t talk her son out of doing something he wants to do. At the same time he drops another bombshell, as he proposes to Susan. She tells him that for the last two years she’s been engaged to the ad agency boss Paul Clemson (Walter Reed) and says that even though she loves Alec more, she’ll need time to work things out for herself before giving him an answer.

Alec is assigned as a gunnery officer on a battleship. All the crewmen are stereotyped characters: the chief is the Brooklyn raised Jewish sailor Frenchy Shapiro (William Bendix), who frequently drops colorful Yiddish words in his conversations; the fun-loving girl crazy sailors include Ski (Joey Bishop) and the socially well-connected Armenian sailor Slobodjian (Ross Bagdasarian); the officers include the nice guy ship doctor, the pediatrician, Lt. Blanchard (Efrem Zimbalist, Jr.); the brave but paranoid executive officer Mike Edge (Keenan Wynn), who is eager to kill Japs to avenge those Americans who were killed at Pearl Harbor and wonders what a Quaker is doing on a destroyer; and the even-tempered Commander Warren Meredith (James Whitmore), who tries to be fair to everyone.

When it’s learned by the crew that Alec is a Quaker after he fails to give the order to hit an unidentified plane overhead, the men are not sure if he has it in him to do his duty and he becomes unpopular with everyone but Frenchy. The film focuses on the shipmates’ interactions with their Quaker officer, who goes pacifist on a number of set-pieces only to predictably prove by the film’s conclusion that the crew could rest easy that in time of battle he will come through for them. There’s no surprise when Alec returns to port as a wounded war hero from the rocky Aleutian coastline, as he led a volunteer rescue operation to bring back stranded soldiers carrying on them important photographs. At port there’s Susan rushing to greet him and to accept his marriage proposal. 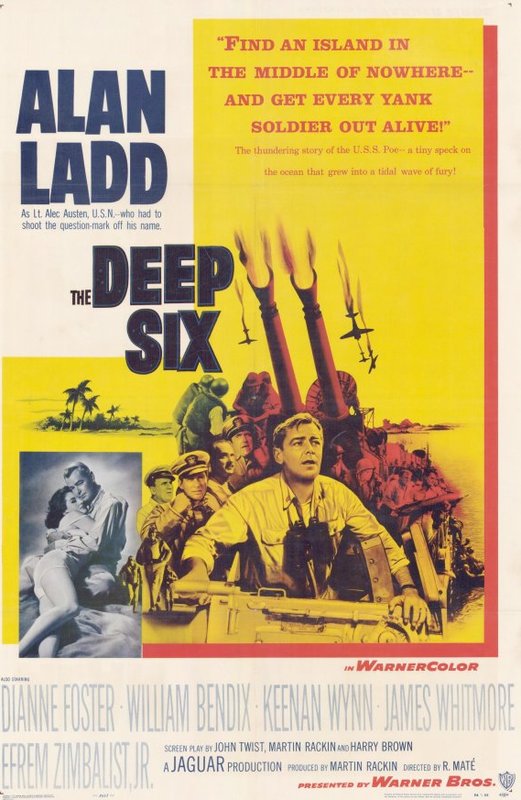