“It’s most noted for being more sympathetic to peace loving German soldiers than are most American war films.”

A well-crafted but listless WWII spy drama that’s based on a true story and shot almost in a semidocumentary style. It’s based on the novel “Call It Treason” by George Howe and written by Peter Viertel, who raises complex questions about patriotism, morality and duty. Director Anatole Litvak (“The Snake Pit”/”Sorry, Wrong Number”/ “Anastasia”) gives it a realistic feel as he shoots it on location in Germany’s bombed-out ruins, and milks it as much as he can for the suspense. It’s most noted for being more sympathetic to peace loving German soldiers than are most American war films.

After being wounded in battle, in December of 1944, signal corps communications officer, Lt. Rennick (Richard Basehart), is reassigned to a special intelligence unit on the Rhine River in Armentières, France, near Germany. Under the command of Col Devlin (Gary Merrill), the intelligence unit pays handsomely for volunteer German prisoners to be double agents. Sensitive medic Corporal Karl Maurer, given the code name “Happy” (Oskar Werner), volunteers after his buddy was executed by loyal Third Reich soldiers for his defeatist remarks and says he’s also doing it as a patriot to help Germany get out of the war sooner and save itself more despair.

Maurer is parachuted into Germany on a five-day mission along with the cynical German POW “Tiger,” Sgt. Rudolf Barth (Hans Christian Blech), who is doing it only for the money, and an untrusting Lt. Rennick still not convinced about the sincerity of the German spies. They split up in their mission to establish a radio liaison with German Gen. Jaeger, who wants to surrender, as Maurer ends up in Nuremberg to track troop movements of the Panzer Corps while the other two go to a safe house in Mannheim. When Maurer gets the needed info he reunites with the other two, which leads to the tense climax.

The point of this antiwar film being that the recruited German spies are hated by their own kind for being traitors and none of the Americans trust them, but put up with them because it’s worth the risk if they bring back the valuable info. Litvak shows that being a spy is a no-win situation: punishment if caught and secrecy if successful.

It was nominated for the Best Picture Oscar. 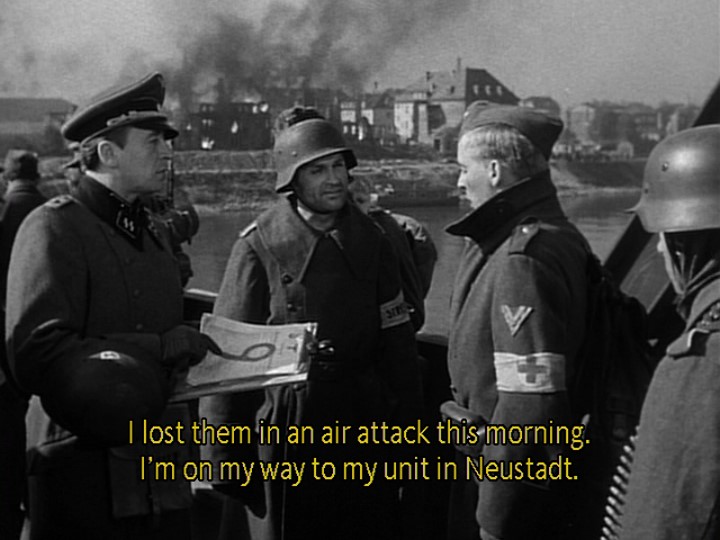