“In this wearisome and predictable plot line, Death falls in love and bores us to death talking about it.”

Mitchell Leisen’s (“Murder at the Vanities”) second film is a dark fantasy about death. It’s based on the 1929 Italian play “La Morte in Vacanza” by Alberto Casella and the screenplay is by Maxwell Anderson and Gladys Lehman. It was remade in 1998 as “Meet Joe Black” with Brad Pitt and Anthony Hopkins, and wasn’t even as good as the original. This version suffers from a bad case of flowery dialogue, a heavy-handed touch, too much preaching about learning to live with death and an unappealing Fredric March acting too stagy in a windbag performance.

The film opens on a nighttime country road and aristocrats in two cars are racing around a mountain bend to the villa of Duke Lambert (Sir Guy Standing) and both cars run over a flower vender on his horse cart, but he miraculously lives. On the road is the ominous shadowy figure of Death (Fredric March), who declares a three-day holiday for himself to find out what it’s like to be human and fearful of death. After frightening the pretty damsel Grazia (Evelyn Venable) in the Duke’s garden and causing her to faint, Death introduces himself to the Duke in his private chamber and invites himself to stay on his holiday in the Duke’s villa. He makes the Duke promise not to tell the others and insists none of the guests leave, and as a trade-off he guarantees none of them will die while he’s around in mortal form. To give him a mortal disguise, he becomes the real Prince Sirki–someone none of the other guests know but the Duke was expecting until it becomes known to the Duke he’ll never be able to see him again. On his first night as a mortal, the Duke introduces the Prince to his gracious wife Stephanie (Helen Westley), the attractive wealthy Americans Alda (Katharine Alexander) and Rhoda (Gail Patrick), the fearful, astute and elderly Baron Cesarea (Henry Travers), the suitor of Alda, Eric, and the suitor of Grazia, the Duke’s son, Corrado. The Prince drinks wine for the first time and makes a toast to life and meets Grazia and her mother Princess Maria (Kathleen Howard) before he hits the sack.

The next morning the guests are puzzled that the newspapers report no deaths, and someone jumping from the Eiffel Tower manages to survive. From the Prince’s talk with the experienced Baron, he learns life is about games and the biggest game is love. On the second day, the Prince makes a play for hottie Rhoda but she finds him too awkward and splits. On the other hand, Alda feels she’s deeply in love with her foreign mystery man and offers him her fullest love. When he takes her up on that challenge and she looks into his eyes and sees a dark monster resembling death, she changes her mind about dying to be with him (March’s face was converted by use of a red and green light which distorted his usual good looks into a monster). Now that Alda knows the Prince’s secret, she fears to tell the others. But on the third day, Grazia swoons over the Prince and the brave Corrado wants to take her away from him and bring her back to her senses. The Duke fearing for his son’s life, tells everyone the secret so no one will do anything rash and hopes for the best. It concludes with the Prince feeling for the first time what love is and understanding now how humans feel about death bringing them pain and loss, as he bids them adieu after giving a sermon that there’s only a shadow between life and death but he has learned that love casts out fear and is as strong as death. In this wearisome and predictable plot line, Death falls in love and bores us to death talking about it (Don’t you just hate lovers who tell all!). 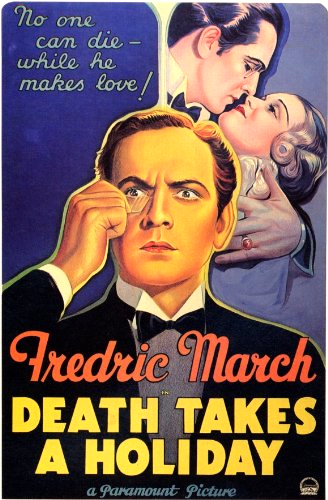