DEATH OF A CYCLIST

A mannered guilt trip melodrama made with a great deal of difficulty under the Franco regime. The film aimed to be socially critical of the wide gap between the poor and rich in contemporary Spain and show the filmmaker’s displeasure with Spain’s stifling reactionary society. It’s leftist filmmaker Juan Antonio Bardem’s (“Los Pianos Mecanicos”/”The Mysterious Island of Captain Nemo”) most famous film, but suffers from censorship as he was forced to punish the adulterous woman in a contrived tragic ending. It’s based on the short story by Luis F. Delgoa. It was released in America in 1958 as Age of Infidelity.

Upper-class associate geometry professor Juan Fernandes Soler (Alberto Closas) is speeding during twilight on an empty country road when out with the married woman María José Castro (Lucia Bosé), the wife of wealthy industrialist Miguel (Otello Toso), and while she was driving accidentally hits a cyclist. Instead of helping the still alive injured man, they ride off afraid their longtime adulterous affair will be discovered and later learn in a newspaper article that the man died.

The busybody art critic Rafa (Carlos Casaravilla), a dastardly hanger-on in their social circle, who is invited to mingle with the rich only because he represents culture, tells Maria he saw her driving with Juan and exerts blackmail. She worries that Rafa could ruin her marriage, not showing any concern for the dead man only her situation, and gets Juan to investigate if the police are tracking down the hit-and-run car.

While guilt eats away at Juan, which makes him so self-absorbed in his own problems that he acts with callous disregard during an exam and his actions brings about a school riot calling for his resignation when one of his competent university students Matilde Luque (Bruna Corrà) fails her school exam while he reads a paper and tells her to step down before she completed solving the analytical geometry problem.

While keeping things suspenseful in the luminously shot black-and-white film, Bardem exposes the way those in the elite circles of Spanish society operate above the law and get all the breaks while no one cares about what happens to the poor, such as the working-class cyclist’s family who live in a squalid project and learn the police are not even concerned with finding their provider’s murderer. But inner-turmoil and guilt gnaws away at the couple, and as a consequence of their unethical actions their lives are ruined.

The stylish film was greatly influenced by Italian neorealism; Bardem was one of Spain’s major directors who brought Spanish films to the attention of the international crowd. This film was the winner of the International Critics Award at the 1955 Cannes Film Festival, but Bardem couldn’t attend because Franco had him jailed for political reasons. But the international community put pressure on the regime and got him released. In 1958 Bardem founded an independent production company and under his leadership he invited his friend Luis Buñuel, after a long exile, to return to Spain to make Viridiana (1961). Buñuel’s great film was banned in Spain and the production company was shut by the fascists, but Bardem managed to barely survive in Spain’s repressive climate by making co-productions with other European countries. 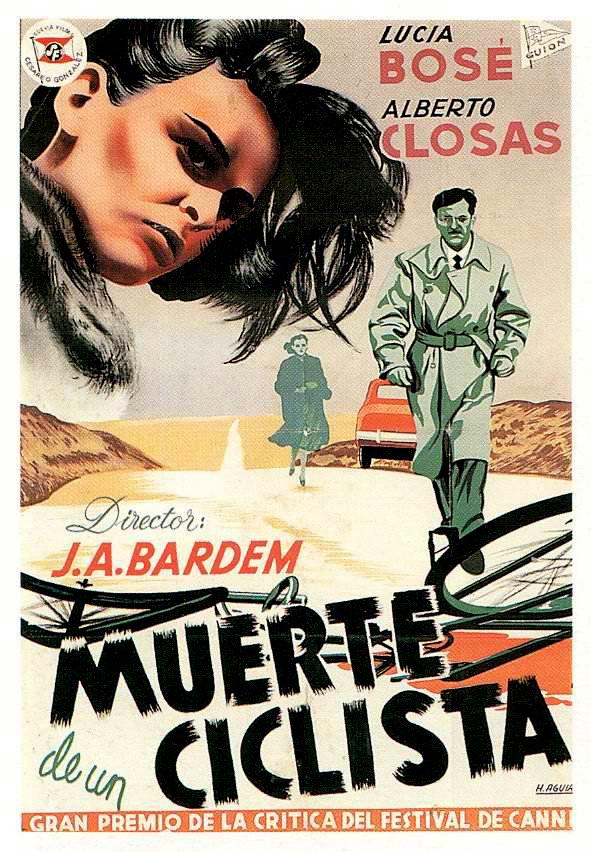