The classic British chiller was made at Ealing Studios, a studio known for its unique droll comedies. This film is a horror anthology that features five stories of supernatural terror from four different directors (Alberto Cavalcanti, Charles Crichton, Basil Dearden and Robert Hamer) and a circular linking story that leads to an almost surreal climax. The stories are an uneven mix, with Cavalcanti’s “The Ventriloquist’s Dummy” being by far the most riveting and Crichton’s “Golfing Story” being the one that doesn’t break par– its ghost story shoots for comedy and revenge on a cheater in a gentleman’s golf game where the winner gets the girl they both desire, but is soft on both the comedy and the chills.

The film uses the unsettling framing device of a group of strangers who find themselves inexplicably gathered at an isolated Victorian country estate in Kent, Pilgrim’s Farm, who are uncertain why they have come. When successful London architect Walter Craig (Mervyn Johns) arrives to reconstruct the farmhouse after being called by Eliot Foley (Roland Culver), he gets spooked as this is the same place as his recent nightmare and with the same people present. The topic of conversation during the nightmare turned to the world of dreams and nightmares, and each guest shared a frightening event from his/her own past.

The sterling Cavalcanti segment is told by a sober Germanic psychologist (Frederick Valk) and stars an intense Michael Redgrave as the ventriloquist in a cabaret act who develops a dual personality and believes his dummy “Hugo” is alive (A 25-year-old dwarf named John McGuire was used for when “Hugo” walked on his own), as the mechanical object takes control of the ventriloquist and causes him to try to take the life of another ventriloquist (Hartley Power) in a jealous fit. The story of a dummy coming to life has often been told, including in The Great Gabbo (1929) which starred Erich von Stroheim.

The other story that caught my interest was Robert Hamer’s segment of “The Haunted Mirror,” who was making his directorial debut. Wealthy businessman Ralph Michael is given a present of an antique mirror by his fiancee Googie Withers, and in this chilling tale the mirror belonged to an insanely jealous crippled man of the 19th century who for no logical reason killed his pretty wife as he imagined her to be unfaithful. The mirror was never used again until sold to Googie by the antique dealer and it turns out the mirror possesses those who own it. Thereby the new owner attempts to strangle his now wife Googie, as he becomes overtaken with an insane jealous fit in the same way as the previous owner.

The other stories presented were the melancholy “Christmas Party,”that has the teenager Sally Ann Howes stumble upon a strange little boy during a holiday game of hide-and-seek and the lad turns out to be not who he seems. Also “The Hearse Driver,” a tale that was a tour de force performance for character actor Miles Malleson as the hearse driver. The tale was told by Antony Baird, who is a racetrack driver recuperating from an accident and has a vision of a hearse from the window of his hospital room.

When viewed as a whole, the narrative arc is bubbling over with some spooky nightmarish fervor and well worth a look. 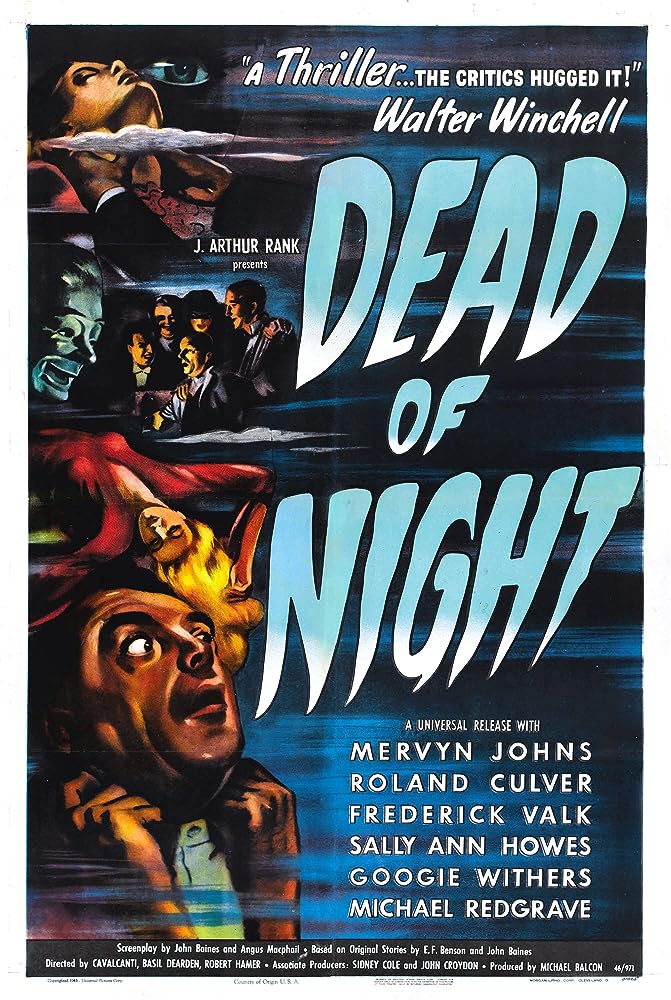