“This is Carl Reiner’s cleverly adapted spoof on noir films of the post-World War 11 days.”

This is Carl Reiner’s cleverly adapted spoof on noir films of the post-World War 11 days. The comedy relies on creative editing of the Forties classics, which includes a host of stars from Bogart to Cagney to Ava, as they are creatively spliced into the present story. Steve Martin plays the private eye Rigby Reardon, who is a cloddish imitation of Bogart in “The Big Sleep.” Any scene could have Martin conversing with someone like a Cary Grant or a Veronica Lake, or being shot at by Alan Ladd.

Rachel Ward is the sexy doll with the husky voice who plays his client Juliet Forest. She comes into his office and faints at seeing the newspaper headline announcing that her father, Dr. Forrest, has died in an auto accident and she awakens to Martin’s breast rearrangement of her (which is what he calls it when he is caught in the act of feeling her up). But she hires him, anyway, for $10 a day plus expenses, to find her father’s killer.

Dr. Forrest is a renown scientist and his hobby is making cheese molds. After Ward gives Martin the key to her father’s lab, he goes there to search his lab for possible clues and tells us he found the lab in room number 2 because it smelled like that number. His first clue is in the form of a cryptic list he finds on the tip of a money bill, which is labelled “The Friends of Carlotta.”

Martin is shot in the shoulder and is about to faint in Ward’s house but the haughty butler (Reiner) when asked to catch him says, “Sorry, I’m a butler not a catcher.” Ward uses her skill she learned at summer camp for taking care of snake bites, to suck the bullet out of him.

With the help of Bogart’s detective work Martin finds that Carlotta is not the name of a woman, but an island off South America. If you’ve seen “The Bribe,” you’ve got the rest of the film’s story. The Reiner team ran out of ideas and winged the ending the lazy way, with old film clips. Martin does his best to pump energy into the tank by doing sight gags, abetted by the manic role of Reni Santoni as the friendly policeman on the island who tells him the Nazis have landed. Nazis and cheese go together in this film like Vincent Price and villainy.

A knowledge of some of the more popular noir classics like The Big Sleep, Double Indemnity, and Suspicion, might help in soaking up the film’s nostalgia. The overall effect is not bad for a few belly laughs and to marvel at the skills of 1980s technology, but no Cuban cigar for the film as the story went up in smoke somewhere over the hills of Hollywood. 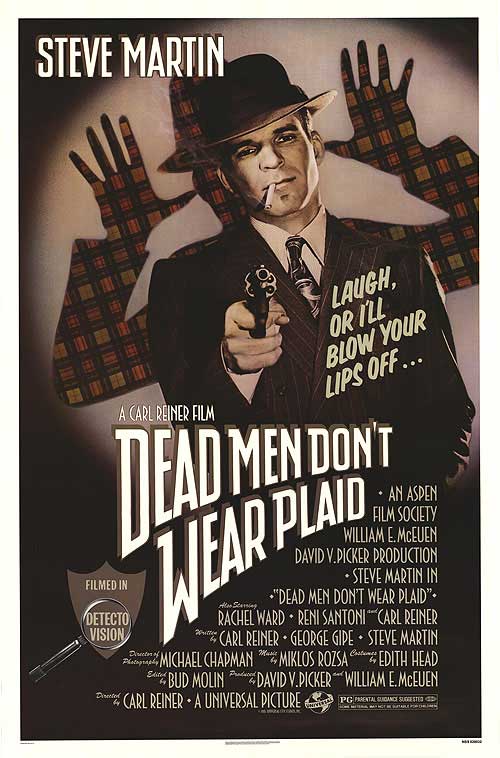