Australian director Phillip Noyce’s (“Patriot Games”) thriller is a mixture of escapist entertainment and throwaway asides to the genre of scare films. It is based on Charles Williams’s straightforward psychological suspense novel.

Experienced boatsman John Ingram (Sam Neill) and his wife Rae (Nicole Kidman) and pet dog are out on the calm waters of the Pacific Ocean of the coast of Australia in their yacht, the Saracen, as she’s recovering from an auto accident in which their son was killed and it’s their hope that this vacation cruise will help them deal with that death. Unable to relax because she is having nightmares about the terrible accident, Rae tries to get her bearings in order with the help of her comforting husband and the calm surroundings.

But their isolation is disturbed by a handsome young man frantically coming towards them in a lifeboat and requesting aid, as it appears as if Hughie (Billy Zane) is the only survivor from food poisoning aboard the Orpheus. John is curious and goes to inspect the schooner, leaving his wife alone with the castaway, whom he locks in a room. It turns out Hughie is a sadistic killer, and after knocking out Rae steers the yacht away in the opposite direction. John watches this startling development while aboard the sinking Orpheus and at the same time discovers the man on his boat is a psychopathic killer, as he takes stock of the mayhem on the vessel and realizes he must bail out all the water or else he’ll go down with the ship.

The film exploits a series of terrifying moments between the killer and Rae, as she fights back both physically and through psychological means as he shows his ugly side. Rae learns in an unexpected way to overcome her dependency on her husband and learns to be resourceful on her own–which I guess was the purpose of the getaway cruise.

Terry Hayes’s thin script provided little more than cheap scares, but Dean Semler’s edgy cinematography keeps the tension coming in waves. Though it never goes beyond its limited aims of being a tawdry thriller, it at least was taut and watchable. 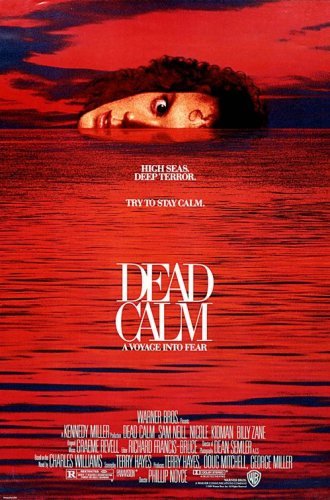