Australia was used for the Mexican location, for this surprisingly watchable killer-plant horror movie. The Ruins went direct to DVD after it got a theater release that was a quiet and quick one. It’s the debut directorial effort for Carter Smith, who adapted it from a 2006 novel by Scott B. Smith (no relation to the director). He was the author of A Simple Plan.

Two tight-knit fun-loving American college student couples from the Midwest: the always complaining Amy (Jena Malone) and her 22-year-old Mr. Perfect med student boyfriend Jeff (Jonathan Tucker), and the bearded Mr. Cool named Eric (Shawn Ashmore) and his blonde beauty girlfriend Stacy (Laura Ramsey), are on a ‘spring break’ vacation in what could be Cancun, Mexico. On the day before they return, a friendly German tourist, Mathias (Joe Anderson), they meet by the pool, invites them to join him on his visit tomorrow to his archaeologist brother Heinrich’s dig site of an ancient Mayan pyramid ruin not on the map. Also along for the adventure in culture is Greek tourist Dmitri (Dimitri Baveas), a resort pal of Mathias. Reaching the ruins, after a long bus ride and an 11 mile taxi ride, on Mexico’s Yucatan Peninsula, in the middle of the jungle, and then hiking along a hidden path, the group discovers the site and is immediately attacked by angry Indians armed with rifles and bows and arrows at the base of the temple’s steps. The Mayans won’t let them leave and won’t follow them as they climb to the top of the pyramid to escape them after they ruthlessly slay Dmitri. There the students find Heinrich and another dig member devoured by plants, and soon Stacy and Mathias are seriously eaten away by the surrounding man-eating vines. Mathias has to have Jeff amputate both his legs with a hunting knife and no pain killers to prevent death by infection.

The survivors realize that death is a good possibility as they’re trapped in this off the beaten path place, that’s far from civilization (can’t even get a cell phone signal), and they’re surrounded on the bottom of the pyramid by the hostile Mayans who don’t want them to leave to spread the plant infections and on the top from the red flowered plants that have a healthy appetite for people.

Though it’s hard to take such hokum seriously, it’s also hard to ignore its shocking unthinkable intense scenes in this well-crafted film that gets a lot of mileage out of its scare story as it plays it straight without camp or wink and nod jokes. 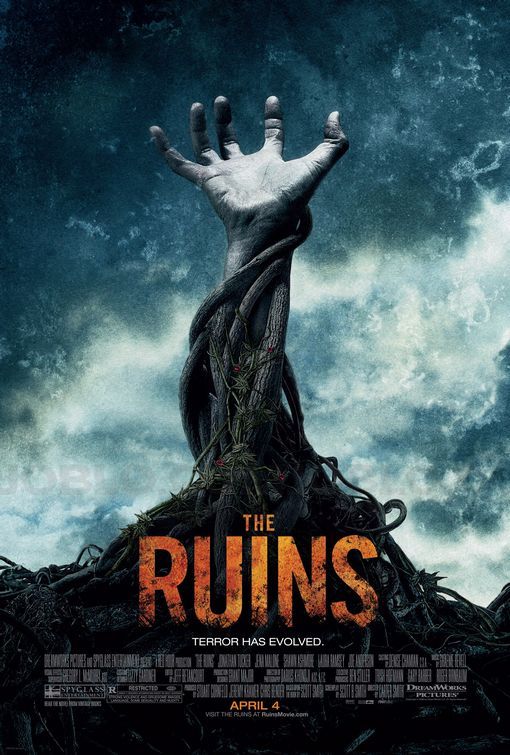