This is the film where Tom Cruise met and would after its release marry Nicole Kidman. It’s a Formula One stock car racing flick that’s formulaic and cliche-ridden. As with most films in this genre, it bombed at the box office.

Director Tony Scott (“Revenge”/”Top Gun”) keeps the story stalled, as it noisily tells about a cocky rookie stock car racer who challenges the champion and predictably wins to the cheers of all. It plays out as merely a star vehicle for Cruise. It’s adapted by Scott from a story by Tom Cruise and Robert Towne, with the latter handling the screenplay.

The gist of the plot is that novice California stock car driver Cole Trickle (Tom Cruise), named after real stock car driver Dick Trickle, is discovered by used car salesman Tim Daland (Randy Quaid), who is trying to get into the NASCAR competition as a promoter, and he commissions veteran crew chief/car designer and father figure Harry Hogge (Robert Duvall) to build a racing car and mentor the kid driver. The action takes place on a number of Southern tracks, as the team aims to win the Daytona 500. But things take a bad turn when Trickle suffers a near fatal accident when colliding with his team rival Rowdy Burns (Michael Rooker), and is placed in the care of neurosurgeon Dr. Claire Lewicki (Nicole Kidman).

But fear not racing fans, Cruise will not only recover to win the big race against Rowdy’s antagonistic replacement (Cary Elwes) but get the medical girl and the admiration of the racing crowd.

To be OK with this idiotic drama, you must have a strong stomach for Cruise’s gigantic ego, be lulled into believing that the immature 22-year-old Kidman is a-competent brain surgeon and to have lost your sense of taste if approving the shrill dialogue and inane story. The most entertaining thing was in how risible it was and the only thing incredible was in how Duvall could still look good in such twaddle. 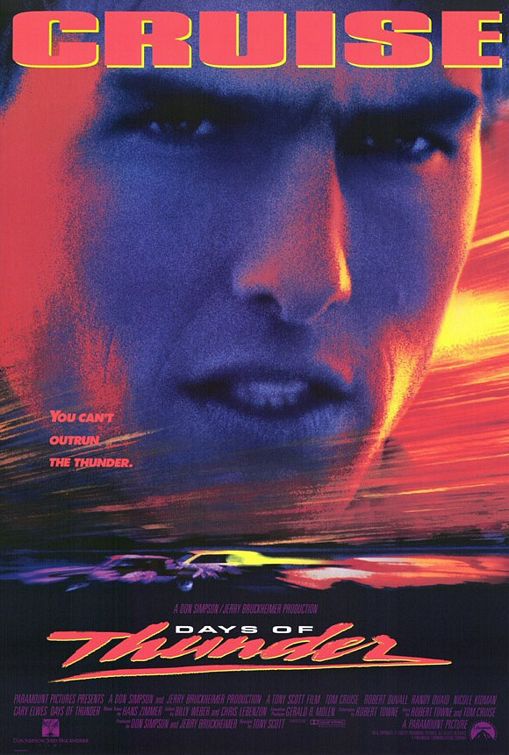