DAWN OF THE PLANET OF THE APES

“A thinking man’s sci-fi film and the result not only didn’t stimulate me but bored me.”

Director Matt Reeves(“Let Me In”/”Cloverfield”/”The Pallbearer”) and writers Rick Jaffa, Amanda Silver and Mark Bombacks go for a thinking man’s sci-fi film and the result not only didn’t stimulate me but bored me. It was overlong, too smug in its concepts over the inevitability of war, its discoveries about human nature were too obvious and its social conscious message was too preachy. The film’s success is dependent on its wonderful visuals and its overload use of spectacular special effects, which didn’t engage me enough to overlook all I didn’t like about this long-winded didactic lecture on getting along with others and not being afraid to disagree with your own kind if they’re wrong. It’s a prequel to the long running series, one that started in the late 1960s as The Planet of the Apes.

The follow-up to the 2011 “Rise of the Planet of the Apes” continues where that one left off. A simian virus, that originated in the lab, as scientists hoped to cure Alzheimer’s disease, some ten years ago, killed off most of the Earth’s population. A group of diverse bland survivors have out of fear huddled together to stay at a military weapons armory in a destroyed San Francisco while their leaders try to locate and repair a hydroelectric dam in the wild forest area (the Muir Woods) outside the city’s Golden Gate Bridge, so that when they run out of power in a few days they can restore it before a widespread panic results. The problem is the dam is in ape territory, and the humans and apes are in conflict (the apes blame humans for caging them and the humans are suspicious that the deadly virus came from apes). The survivalist de facto leader, sending update messages on conditions to the crowd via a megaphone, the narrow-minded ex-military man, Dreyfus (Gary Oldman), authorizes a scouting party into the ape territory led by the humanist architect Malcolm (Jason Clarke), his new medico second wife (Keri Russell) and his withdrawn artistic teenage son Alexander (Kodi Smit-McPhee). The group encounters in the woods a group of genetically evolved lab apes who carry weapons, ride horses and speak primitively while living peacefully in a tree-bound village of apes. They are led by the human lover Caesar (Andy Serkis), his wife Cornelia (Judy Greer), his ambivalent son Blue Eyes (Nick Thurston), the old tribal counselor Maurice (Karin Konoval) and the leader’s rival, the human hater and former lab captive, Koba (Toby Kebbell). The high IQ Caesar talks the human language (he was raised in a lab by his kind researcher master Will-James Franco-and evolved further when liberated) and explains to Malcolm why the armed scouts must leave and never return after an ape hater (Kirk Acevedo) in the party panics when seeing so many apes and kills one.

The gist of the pic shows how difficult it is to maintain a cease-fire with hot-heads on both sides ready to ignite a war and how alike the father ape and father human are, Caesar and Malcolm, in desiring peace and that their children grow up in a trusting, tolerant, healthy and viable environment. It also shows the negative reactions to peace by the haters like Dreyfus and Koba, who think war is the only way to survive and to determine who is fit to rule the world. The human quest to restore the dam and the ape resistance to humans in their home leads to war, as both sides can’t overcome their fears of each other and are pushed into a deadly conflict by the same blind forces who always choose war over peace.

For all that is supposedly so intelligent about this message film, it can be questioned for sending out only a safe message about the nature of conflict and not telling us a thing about the seething current global hotspots we don’t already know. It relentlessly hits us over the head with the message of ‘make peace and not war’ in case we somehow missed it and would forget to applaud a summer blockbuster action flick for being so smart. 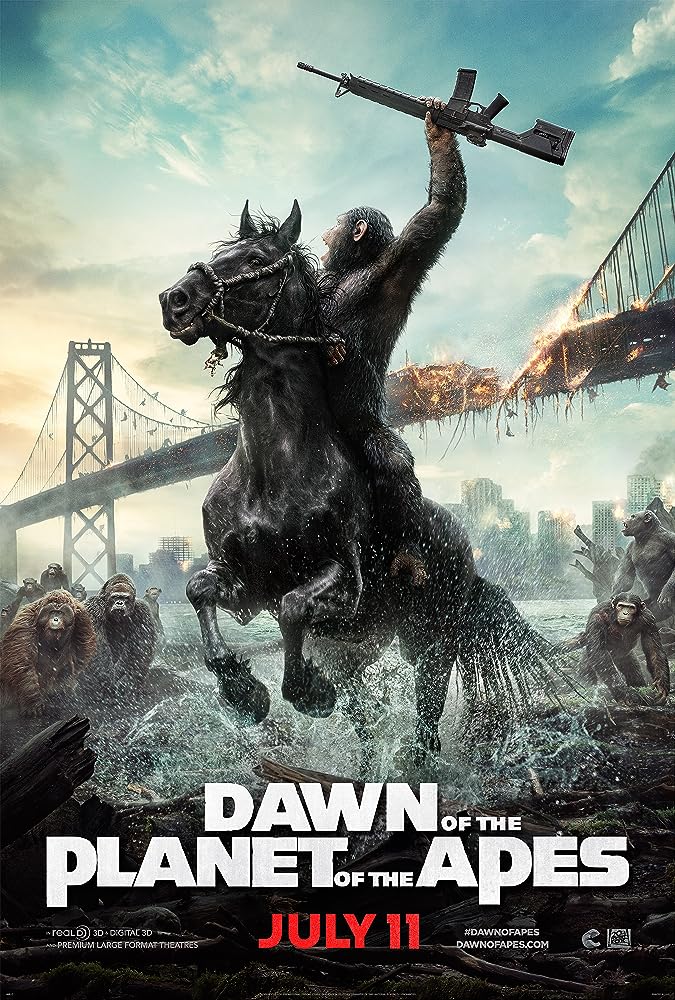