Quirky comedy-drama idiosyncratically directed by Wes Anderson (“The Royal Tenenbaums”/”The Life Aquatic With Steve Zissou”/”Bottle Rocket”). He excels in family dramas where he paints his characters as charmers who never grew up, but this one never completely stays on the rails and when it gets off them it either has its most refreshingly absurd or most fatally tenuous moments. Anderson wrote this wacky script with co-star Jason Schwartzman and Roman Coppola.

It follows the adventure of the three unlikable wealthy estranged Whitman brothers: the oldest, the most neurotic and the one who arranged the trip, Francis (Owen Wilson); the married middle brother, Peter (Adrien Brody), who is having an anxiety attack over his wife’s late-stage pregnancy; and the vain short-story writer, Jack (Jason Schwartzman), who still is concerned about the affairs of his ex-girlfriend he has been staying with in Paris. The brothers, all smokers and cough syrup remedy takers for their imagined ills, take the quaint railroad called the Darjeeling Limited to go on a spiritual journey across India’s Rajasthan region in search of their inner selves and to bond again. To facilitate matters, the anal-compulsive Francis has hired the bald Brendan, who is seated in a different train car, to be his flunky and to arrange a daily itinerary for them which includes a list of spiritual places to visit. The problem is the brothers are all a bit jerky, self-absorbed, and are weighed down by matching Louis Vuitton suitcases they all carry that was inherited from dad (the end credits tell us they were designed by Marc Jacobs for Louis Vuitton, with “suitcase wildlife drawings” by Eric Anderson–the director’s brother).

Francis is now happy to be alive after intentionally driving his motorcycle into a hill and nearly dying, and as a result his face is bruised and his head is bandaged (one had to feel for Owen, especially after seeing him looking like this and learning of his recent suicide attempt). The last time the brothers saw each other was a year ago at their father’s funeral, who was in a traffic accident with a NYC cab. They were disappointed that their mother (Anjelica Huston) never showed, as she’s living in the Himalayan foothills of India as a nun. Francis is trying through Brendan to make contact with his mom to announce their visit, only to receive word from her not to come now, but in the spring, because there’s a man-eating tiger in the area.

The train scene is laced with droll humor. It has the overbearing Francis taking charge over his younger brothers, as he can’t stop ordering them around and making them assent to his plans. He even orders what they should eat for their meals. Things get dicey when Peter tells the bossy Francis that Jack is planning to leave and he further irritates his brothers by laying on them that dad’s last words were that he was his favorite son. In the meantime Jack has taken a shine to the pretty train stewardess who serves sweet lime, Rita (Amara Karan), and has sex with her in her cabin. Her boyfriend is the chief steward (Waris Ahluwalia), who finds the brothers disagreeable and after he finds an escaped poisonous snake in their first-class sleeping car he uses that as an excuse to kick them off the train at the next stop.

The brothers stop their bickering to rescue three local boys whose raft tipped over in a fast-moving river. This brings the brothers into the warmth and togetherness of a peasant community, who reach out to thank them for saving two of the boys. This key scene in the film offers its most serious moments, but its pacing was leaden and the whole experience was too clunky to be moving (Anderson can never be mistaken for a great humanist filmmaker like Satyajit Ray, whom he pays tribute to by playing the soundtracks from his films). The caring community seems to have had a profound effect on the boys, who use their final moments in India to visit their Catholic nun mother in her convent. She becomes the guru they never met in India and advises her children to get rid of all their excessive baggage and travel lighter. This becomes the film’s lazily drawn metaphor (that actually makes little sense on a literal level, as it only counts if this enlightenment comes from within), as the boys on their trip home run to catch the Bengal Lancer train and throw away their baggage.

But aside from not knowing in what direction to take the story and how to end it, this touristy lightweight spiritual tale travels comfortably in first-class but also spends some time on the back roads where it seems to want to be more adventurous even though it only manages to tell us that its “stoopid” spiritual quest still brought the brothers together for some much needed brotherly love (which for me was on a good enough note to end the film). 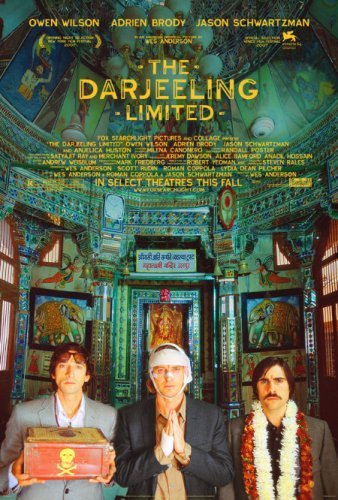