Cyclo was shot in modern Ho Chi Minh (Saigon). It was directed and written by Tran Anh Hung (The Scent of Green Papaya), as if he were a tourist visiting hell and was shocked by all the squalor. Tran was born in Vietnam and ever since 1975 when he was 13, he has lived in Paris. The Vietnamese city he revisits in 1994 is a demoralizing place, where poverty and crass materialism go hand in hand. In this somber world the director chooses to let his characters be nameless; instead of real names they are given nicknames derived from either their occupation or some description used to identify them.

The 18-year-old cyclo driver (Le Van Loc) has the right face of despair for this hellhole he was born into and can’t escape from; he is not finding much to smile about as he pedals all over this bustling town picking up fares to help keep his family supplied with the bare necessities, only to return at night to the small two-room open shack the family lives in. It seems to be an endless cycle of suffering.

The pedicab cyclo driver’s mother died at childbirth and his father died in a truck accident while he was young. Now everyone must work in this family even if they are too old, too unhealthy, or too young. His elderly grandfather repairs tires, his very young sister shines shoes, and his very special older sister (Tran Nu Yen Khe-the director’s wife), a beautiful and gentle young lady, is the matriarch of the family and works as a water carrier in the marketplace.

This is a humanistic story told in a surrealist manner about young men who need their father’s help but all their fathers are either dead, or abusive, or can’t help them; and, the boys are caught in a vicious circle that they can’t get out of. Their miserable lives have no good prospects in sight and no proper father figure around to help them.

Poetry is the vehicle of choice for how the story is best transcribed onscreen, since dialogue is almost non-existent. It is told as if time doesn’t exist, one event runs into another and everything seems jumbled. Images of water and fire are used throughout the film for purposes of symbolically cleansing the soul and destroying the impurities in it.

Paint is used as a contrast to blood. Crazy Son, the Madam’s son, paints his face yellow and gets Cyclo confused as to who he is. Crazy Son even thinks that Cyclo might be his father. When Cyclo is drugged-out he paints his face blue and swallows some goldfish (whatever that symbolically means!) and the Madam confuses him for her son, forgiving him for everything as she sings lullabies to him.

In a film loaded with contrasts the huge gap between most of the population which is poor, is harshly contrasted with those who have money to burn.

Innocence is corrupted by the experienced; nothing remains pure in this city that is pictured as stealing one’s life, one’s poetry, and one’s spirit. It reduces the innocent to being left with no choice but to be corrupted or die in poverty. In one scene Cyclo is listening to a gangster sing lullabies, while the gangster knifes to death a victim who is bound and gagged.

In another abstract scene, there is a crashed U.S. Army helicopter down in the middle of a heavily trafficked Saigon street. It signifies that there is something despairing about the foreign influence in Vietnam, but what that despair exactly means is never clearly stated.

The action starts when the boy’s cyclo (pronounced cee-clo) is stolen by a rival gang, and the family’s main source of economic support is taken away from them. Cyclo instead becomes part of a gang ruthlessly run by his former boss, the Madam (Nguyen Nhu Quynh). She is the one who owned the cyclo that was stolen and he now pays her back with his servitude. Cyclo has forgotten his father’s sound advice to self-improve in an honest way, so he looks to the gangster way of life to get out of his impoverished state; he is only reminded that he is not following his father’s advice when he has strong dreams that tell him his father thinks there is something wrong with what he is doing.

What Cyclo is after now is power and revenge. He gets revenge when he tosses a gasoline fire-bomb into the rival cyclo driver’s garage, the one that stole his cyclo; and, he later takes out the eye of one of their gang members by hitting him with a board. He willingly comes under the caring tutelage of the Poet (Tony Leung), a small time gang leader for the Madam. Cyclo is soon carting drugs across town during the New Year’s festival, when the streets are jammed and the police are stopping to search those who look suspicious. He also becomes part of the gang’s assassination squad and is given a gun to go with the switchblade he was initially given by Mr. Lullaby. Cyclo wants power, and believes that power comes from the gun he holds in his hand.

Cyclo does not realize that his virgin sister is involved with the Poet, who becomes her pimp. The Poet is the leader of the same gang he joined. The Poet befriends him, and the Poet’s sensitivity is shown by the verses he recites off camera that are coming from his heart. In the Poet’s daily life, he hardly speaks. He is linked to Cyclo by karma and identifies with him and his choice to be a gangster rather than to be poor all his life, thinking that he has little choice. Also, the Poet is endeared to Cyclo because the youngster still has his innocence intact. He, thereby, tries to help him as best as he can. The Poet also shows that he is capable of wordly love as he loves Cyclo’s sister and protects her, even takes her to meet his mother and father. The Poet somehow keeps her a virgin by having her do all the kinky sex tricks that do not involve touching, like in one scene she is peeing in front of a customer.

Whenever the Poet gets tense, his nose bleeds. Blood is used as a symbol of what has to be given in order to be free.

Tragedy strikes for the Sister when a wealthy customer who is into handcuff bondage sex acts, rapes her. When he pays the pimp off with extra money and apologizes for what he did, this does not satisfy the pimp who knifes him to death in a graphically stylized killing. Grossly unhappy that his love is spoiled and that his life is in shambles and that his father hates him — the pimp burns his place down and fatally shoots himself. For the Poet, losing one’s innocence is tantamount to death.

This film is a visual masterpiece, capturing the frenetic pace of life in the city and the faces of sorrow on the poor; it paints an unsentimental picture of a place that is a living hell. But it is not a masterpiece story-wise, as its story line was rambling, laying no specific blame for what is happening on the local government or for that matter on anyone. It only implies how rotten the Western influence is. Also, it seemed to me, there were too many violent scenes the filmmaker seems to revel in without expounding on them. Tran Anh Hung seems to be expressing an unclear reason for his rage through the use of his troubling images, not letting up on the nightmare he sees before him; but, also not saying why he thinks the violence is inevitable.

This powerful film offers Westerners a potent dosage of what life is like in a Third World country, a country most Americans only envision in a depersonalized way. But the character of Cyclo should have been more flesh-and-blood, rather than used as merely a morbid symbolic example of the loss of innocence. There was something that just seemed to be elusive that the director just wouldn’t let into the story; he doesn’t even want to give the characters real names, as if he thought the viewer would sully their life even more than it is already. Tran Anh Hung mainly wants to shock our sensibilities from a safe distance away, to have us look plaintively at his native country like he does– even if he too is only a tourist. There is nothing wrong with that in itself, but his intentions could have been painted with clearer brushstrokes.

Still this is one powerful film, filled with relentless and disturbing visualizations whose poetic voice comes from the inside of the director and is strong and boiling over with true emotion.

Cyclo was a winner of a Golden Lion award for best film at the Venice Film Festival. 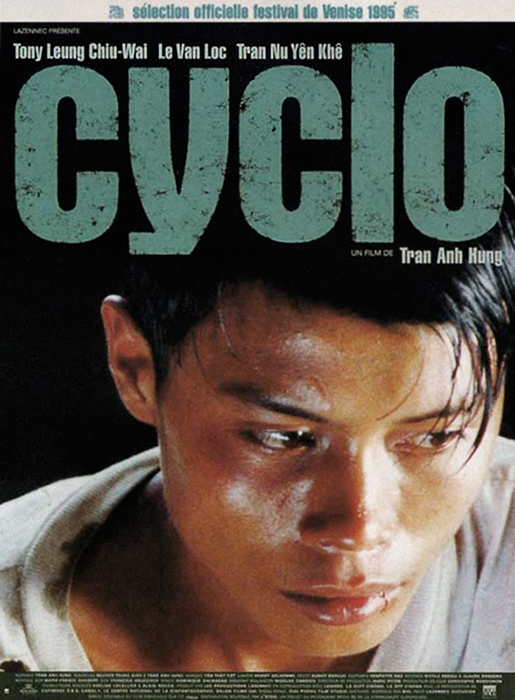