“The documentary works so well because Speed’s for real…“(

“The Cruise” could be described as a whirling dervish tour both of New York City and of the tour guide Levitch’s fertile persona. The guide, a struggling 28-year-old playwright, is living in other people’s homes to help him get by on his $10 an hour job at Gray Line Tours (he earns about $200 a week). He chooses to work at this smaller tour company because his former job at the bigger Apple Line, did not pay as much. This documentary gives us a rapid-fire tour of the city and his lifestyle, and is both an encyclopedic look at the city and a slyly amusing look at the loquacious tour guide. According to him, the cruise is his philosophy of life: “It is about flesh, respect, exhibitionism — it is looking at a flower’s beauty and becoming the flower, and the flower looking back at him.” He is the eccentric, Bob Dylan look-alike, named Timothy “Speed” Levitch, in need of approval from an audience for a job well done.

In a place like Manhattan where it is easy to get lost in its few million people, it is a non-conformist like Speed that makes things interesting and worthwhile. His tour emphasizes his love-hate relationship with the city, which is now in its August love phase. A tour that became legendary in the few years he worked for this company, drawing an international array of tourists atop the double-decker bus that tours Manhattan’s 2.4 million people (under his breath he says he heard the other day the figure might actually be 1.7 million, but I don’t care!).

There are 200,000 people who work at the World Trade Center, Speed mockingly tells us as it sinks in how much humanity that is to be in such a small space. He, also, tells us that he likes to spin around under the twin towers of the World Trade Center and, when thoroughly disorientated, to look up-and-reel under the illusion that the buildings are toppling down on him.

Speed’s knowledge of the literary figures and where they lived is truly spellbinding as he tells about where Thomas Paine died, Mark Twain lived, where the opium smoking Edgar Allan Poe wrote the “The Raven,” and how the poet Dylan Thomas died in the White Horse Tavern after having 16 martinis and his last words were bring me another.

Speed’s view of the Chrysler Building whose top three floors are an imitation of the Chrysler’s car front grill, is taken from a quote by the critic Lewis Mumford: “uninspired voluptuousness.” That Central Park was designed by the transcendentalist Fredrick Law Olmstead whose vision for the park was not to play baseball or jog or roller blade or to be a place in which to work up a sweat, but to focus on nature in a peaceful meditation.

Speed confesses he took the job mainly to pick up girls. Work to him is one of the poisons of civilization. Civilization is a place that is splitting us apart; it encourages people to never say the truth. One feels nauseous in the city, but does not become sick of it. This is a most unusual opinion for a tour guide to have who is promoting the accomplishments of one of civilization’s most advanced cities. Speed is more at home telling us ‘the cruise’ is a way of being yourself and about how Henry James lived his life here than he is about impressing the tour with the huge phallic symbol — which is one of NYC’s main tourist attractions: the Empire State Building.

Speed drops the names of celebrities to point out where they reside. When he mentions Greta Garbo, he says she chose to live in NYC because it was the only place in the world where she could be alone.

Speed gets a childish glee when reading from a sign he sees on a building near where he is free-loading, which says ‘Everything You Know Is Wrong’. For him, it is these little things in life that one notices that give it its relevance. What apparently irks him, is that his grandparents consider him to be a failure because he doesn’t have a regular type of job and is materially floundering. This causes him to go off on one of his diatribes about his need for personal freedom which shows him to be a bit insecure, even with all his bravado when he intellectualizes. But he was confident enough of himself to quit his job and go into business for himself after this documentary; he now gives his own private tours.

I loved the nutty Speed’s eclectic tour; it is shot in a clear video which is blown-up to 35mm and looks magnificent in B & W. The documentary works so well because Speed’s for real, as is his flowery monologue and his genuine NYC nasal accent. His battle with his tour line wanting him to wear a uniform to work or else they will have to let him go, is one that I side wholly with him. Stop trying to make people conform! If you were ever interested in a tour of NYC this is a good one to catch, and you don’t even have to visit the city. 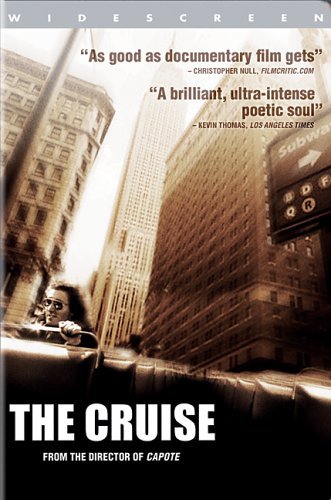