“A Japanese classic film noir about a botched heist.“

A Japanese classic film noir about a botched heist from Japan’s Nikkatsu studio, it’s oldest studio, started in 1912. It resembles most Kubrick’s The Killing (1956).

Takumi Furukawa (“Tôboshâ“/”Season of the Sun“/”Black Falcon”) does a fine job directing all the action scenes and writers Hisatoshi Kai and Haruhiko Oyabu provide a richly tense script.

The 36-year-old tough-guy criminal, Togawa (Joe Shishido), whose family was killed in China during WW2, lives with his beloved kid sister Rie (Chieko Matsubara). When a trucker runs her down and leaves her crippled and hospitalized, Togawa as revenge kills him. In prison for the last two years, crime boss Matsumoto (Hiroshi Nihon’yanagi) uses his influence to get him an early release so he can lead a heist of an armored car carrying 120 million yen in cash from a racetrack. The disbarred crooked lawyer for the mob, Ito, sets up the operation and allows Togawa to do it his way. Not trusting the guys chosen for the job by the boss, Togawa excuses one blabber-mouth (Hiroshi Kondo) but uses his loyal pal Shirai (Yuji Kodaka), the unreliable junkie gambler (Saburo Hiromatsu) and a punch-drunk ex-boxer (Shôbun Inoue). The gang diverts with a roadblock the armored car from the main road onto a deserted dirt road. Togawa then kills with a high-powered U.S. rifle the motorcycle cops escorting them, but the driver and guard won’t leave the truck. Since only the guard has the key to the back where the money is kept, the gang take the armored car in their bigger truck to an abandoned rundown former U.S. military base. The story then becomes one of double-crosses, and we await to see if anyone can survive all the gunfights and betrayals that ensue. Togawa gets outside help from his friend Takizawa (Tamio Kawachi), who runs a jazz bar catering to black American soldiers. He was his sister’s boyfriend before the accident. Takizawa, through his connections, gets Togawa false passports to flee the country. Minako Kozuki plays the femme fatale Keiko, who works for the bosses but changes her allegiance to Togawa.

It ends on a bitter ironical note, in a post-war Japan that is changing from its traditional past and is at times badly influenced by America. 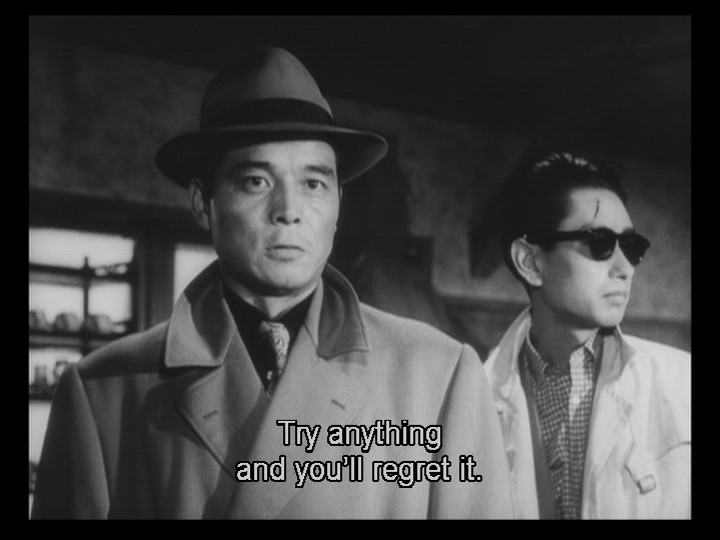