CRIMES OF THE FUTURE

In this chilling dystopian horror story, Cronenburg creates a weirdo society of sicko sybarites where pain is the ultimate pleasure and ‘surgery is the new sex’.

Saul Tenser (Viggo Mortensen) is a celebrity performance artist, who with his girlfriend partner Caprice (Léa Seydoux), a former trauma surgeon, publicly showcase in a freak show the metamorphosis of his organs in avant-garde performances, before a paying audience to a futuristic freak show.

The setting is in the indeterminate eerie future in which people’s bodies are changing and everyone predicts that they are on the brink of a post-human evolutionary stage. Developments in medicine and analgesia have diminished physical sensation to the extent that pain is a thing of the past. Thereby it becomes a unique experience for a new breed of weirdos to experiment with pain and also with sensual pleasure, and also deal with the usual mental woes such as disgust and fear that has forever controlled human behavior. Because of this new process, bodies themselves have also shown that they are capable of growing undefinable organs.

Saul sleeps and eats in bizarre carbuncular cradles. Periodically Caprice gets her scalpel out and removes Saul’s weird new post-Anthropocene organs and tattoos them as fodder for their show.

We’re led to believe that because people eat and metabolize plastic, the human body has evolved, growing nonfunctional organs. The process is called an Accelerated Evolution Syndrome.

The couple are monitored by representatives of the sinister National Organ Registry: headed by Chairman Wippet (Don McKellar) and his nervous assistant Timlin (Kristin Stewart), on the lookout for signs of evolutionary growth among humans.

It’s a curious film, with unsympathetic leads. It tells about the human condition and is not a film for one for those who can’t look at torture, cannibalism and other grotesque things without feeling repelled by its horrors. Cronenberg’s meaning might be obtuse, his world-view might be gloomy, but his world of fetishes is avant-garde friendly and his work is brilliant as black comedy and as an unsettling head trip that creates a futuristic visionary value system that is starkly different than ours. It’s a film that haunts you long after seeing it, as it’s creepy and despairing.

It was shot in Greece under tough circumstances.

Crimes of the Future screened at the Cannes film festival in the competition. 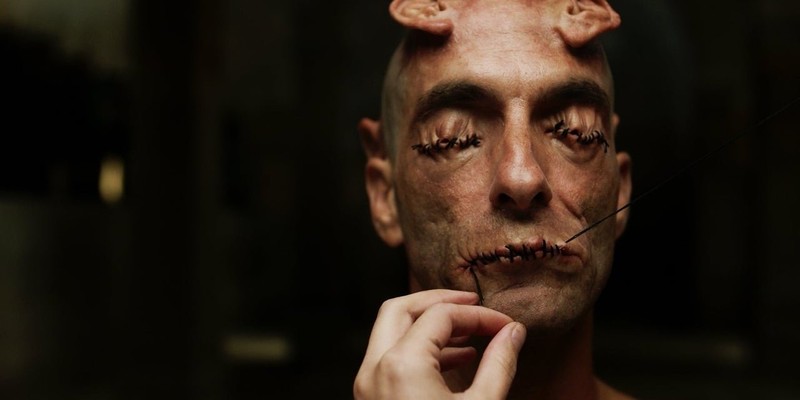