A minor but most enjoyable tongue-in-cheek Hitchcockian-like spy thriller from the Michael Powell & Emeric Pressburger team. Conrad Veidt is Danish Captain Anderson of the merchant ship Helvig. Anderson is stopped on British waters for a contraband check in 1939 and taken to a control port, where he will have to wait until morning before the boat is cleared. Anderson soon discovers that his landing passes given to him by the British have been stolen by two passengers, Mrs. Sorensen (Valerie Hobson) and Mr. Pidgeon (Esmond Knight), which prompts Anderson to row ashore in pursuit. It will turn out that both are agents for British Naval Intelligence. He locates them on a train bound for London, but loses him and desperately clings to her (a wise choice, she is very attractive). In the middle of the blackout a vender is hawking gas masks and torches, and the wartime atmosphere is cleverly made use of as Captain Anderson meets up with and courts the divorced Mrs. Sorenson despite the imminent dangers surrounding them. He takes her to dine in the Danish restaurant of the brother of his first mate, Axel Skold (Hay Petrie), and is given the royal treatment by the owner, Erik Skold (Hay Petrie). After leaving the restaurant the two are captured by German spies and taken for interrogation to an old nemesis of Sorenson’s, Van Dyne (Raymond Lovell). The German discovers Sorenson has spy info hidden on cigarette paper.

When Anderson escapes he leaves Sorensen behind to make it look like they are both there, and he goes back to the same restaurant and recruits the help of the staff to rescue her and capture the spies. Mrs Sorensen now gives the real message she is carrying to her superiors and the merchant ship sails on time to Denmark with everyone aboard.

The brisk pace and its added touches of quaintness, made the film endearing inspite of the lack of any character study and the one-dimensional tone of the villains. The likable lovers, also, starred in Powell’s The Spy in Black. It was strange to see Veidt in a romantic hero role; and, even though, he is such a fine actor, I still prefer him in villain roles and wonder how much better a more romantically inclined hero would have fared in his role.

My favorite line is when Veidt tells Hobson why he is still not in the Danish Navy: “The smaller the ship, the bigger the adventure.” 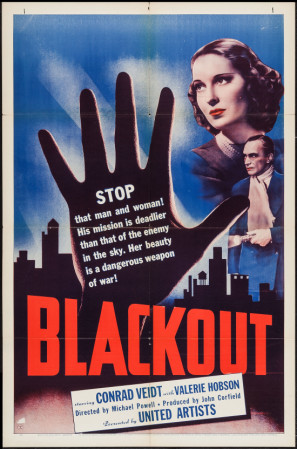