This most uncompromising film is based on the Britisher J.G. Ballard’s 1973 novel Crash. The theme is sex, death, and technology. But what this Canadian film is trying to say about those subjects, is anyone’s guess. My guess after seeing this film three times, is that it is not trying to say anything. It takes a car crash — something no one in their right mind can revel in and get sexually off on — and depicts a sexual fetish cult that finds a car crash to be as stimulating as a sexual act. “Crash” probes how strange the mind is, especially in this post-nuclear age; and, how sex is created in the mind, and how sexual fetishes are no stranger than anything else conceived in the mind.

In lieu of a regular story line, the film consists of a series of obsessive scenes regarding car crashes and of having sex in a car. It is the kind of film that one will either love or hate. One thing can be said with a certain amount of reassurance: the film is a faithful adaptation of the book, even keeping the monotonous mood of the book’s repetitive themes played out over and over again. At the 1996 Cannes Film Festival where it got a mixed chorus of boos and cheers from the crowd, it nevertheless received a Special Jury prize for “originality.”

The film has something to say that comes in the form of a veiled warning about the future of technology and the potential deepening psychopathology that is needed for a more benevolent humanity. It has caused ripples of controversy not because of any theme, but because of the following: sex scenes in the cars, its crossing of old moral boundaries in favor of pornography, and the way the film unfolds without a visible story. Its naysayers said it would encourage viewers to have sex while driving in their car, thereby causing accidents. Ted Turner, who owns the rights to distribute the film through his ownership of Fine Line, said he hated it. All I could say to those whose bogus arguments about the plotline does a grave injustice to the film — is horsefeathers! If the film’s dangerous because it shows a couple having sex in the car and the film’s critics think that’s a legitimate reason to ban or knock a film, you might as well censor almost every film made as presenting some danger or another.

In the modern skyscraper city of Toronto, James Ballard (James Spader) produces TV commercials while his wife Catherine (Deborah Unger) either works at the airport or just likes to hang out there. Their marriage is an open one, with each exploring sex in novel ways with other partners and then acting out together what they did with their other partners. While James has sex with a member of his film crew during a break, his wife draws herself listlessly over the nose of a plane parked in an empty airport hangar and strips to her bra while rubbing her breasts against the plane. From behind her, an unknown seducer kisses her thighs and mounts her backside while she writhes her body against the glacial metal of the plane.

James is not fully alert after his busy workday, driving home to his high-rise apartment on the slick highway road. When he bends down to retrieve some papers, he loses control of the car and it goes over the white dividing line and spins out of control to collide head-on with a car going in the opposite direction. While the driver of the other car goes through the windshield and dies instantly — the passenger, Dr Helen Remington (Holly Hunter), survives along with James. They both receive injuries and are taken to the same hospital. James has his leg pinned together by metal rods and walks with a limp. When in the corridor someone who appears to be a doctor but isn’t, Vaughan (Elias Koteas), starts to examine James in detail, checking out the scars on his body. James willingly submits to this examination without checking for credentials or even asking him who he is, even though the examination was a highly suspicious one. James acts as if he is a zombie with a perpetual hard-on for women, scarred men, and car crashes.

Going back to the junkyard to look at his crashed car James meets Helen, who has also come to look for her car. The two get together and find that they have much in common due to the crash. They get along so well that James says he will drop her off at the airport, where she works as a doctor for the immigrants who wish to stay in Canada. He is driving his new car, which is the same model car he crashed. They both complain about the increase in traffic since their accident, when suddenly James loses control of the car and it hits the highway guard railing. This near-accident seems to sexually excite them, so they stop at the airport garage and have some wild sex in his car.

One evening James, Helen, and Catherine, attend what can only be described as a show that has an unusual theme, even for performance theater. Vaughan, it turns out, is a car crash freak and scarred survivor of many car crashes. Vaughan has restaged the 1955 car crash of James Dean down to the exact details for his act. Colin Seagrave (Peter MacNeill), a professional stunt driver, acts as James Dean, while Vaughan acts as his German mechanic who accompanied him to an auto race in Salinas, California, on that fatal September 30th date. They will be driving the exact replica of the Porsche sports car with the number 130 on it that Dean drove when he broke his neck as they simulate the crash with the college student, being acted by another stunt driver, who is driving the other car that James Dean crashed into.

After the show abruptly ends because traffic cops rush the set, James, Catherine and Helen join with Vaughan and Seagrave in the nerve center that they operate together out of Seagrave’s house. Seagrave has a concussion from the crash. Gabrielle (Rosanna Arquette) is the companion of Vaughan, wearing leg braces and a full-body black leather suit for support. Vera (Swarts) is the loving wife of Seagrave, helping him prepare next for the Jayne Mansfield accident he is anxious to stage.

If the film disturbed or was meant to disturb my sensibilities, I can’t really say that it disturbed me. It’s a speculative work, like a test project, trying to see what it can come up with that works. That there is such a thing as someone having a car crash sex fetish like those in the film, seems unlikely. But that doesn’t seem to matter. What matters is that this film is looking for something strange to say about the modern world.

The film acts like a research scientist probing clinically for answers he is not sure of, but only he is trying to solve a problem that he is sure exists. That everyone is dehumanized, might be the point of the film. The acting for what the actors were asked to do — all act in an emotionless fashion, except for the bizarre portrayal by Koteas which is an accomplished performance but not a great one. Spader and Unger are a beautiful couple, pushing the sexual envelope in their intimate but cold relationship. Both have accepted their imminent death as a way of life and are comfortable with their peculiar relationship. Their thrills come from breaking through sexual taboos and knowing they care about each other even if they appear to be distant. Hunter is like them — dehumanized to a certain point. Hunter seems to be interested in her own sexual self-satisfaction above anything else, and her near-death experience seems to have reinforced that need. Koteas is a freak who yearns only for liberating himself sexually through the near-death experience of a car crash. He loves so much what he is doing that it becomes infectious to others and like any charismatic leader, there seems to be always others who will follow him.

The story might be perceived as being more voyeuristic than anything else. It defies having a label attached to it. Somehow, it drew me into it. The film covers ground where mainstream films dare not go; its repetitiveness, its hermetic and absurd nature, make for a film that I like better for its raw nerve than how it is perceived through all the hype it has received. I enjoyed it because it was so well-made and presented; and, strangely enough, for a film that some criticized as pornographic, I found it to be in the best of taste. What it lacked was definition and perception, and a sense of getting out of its own awe-inspiring way. 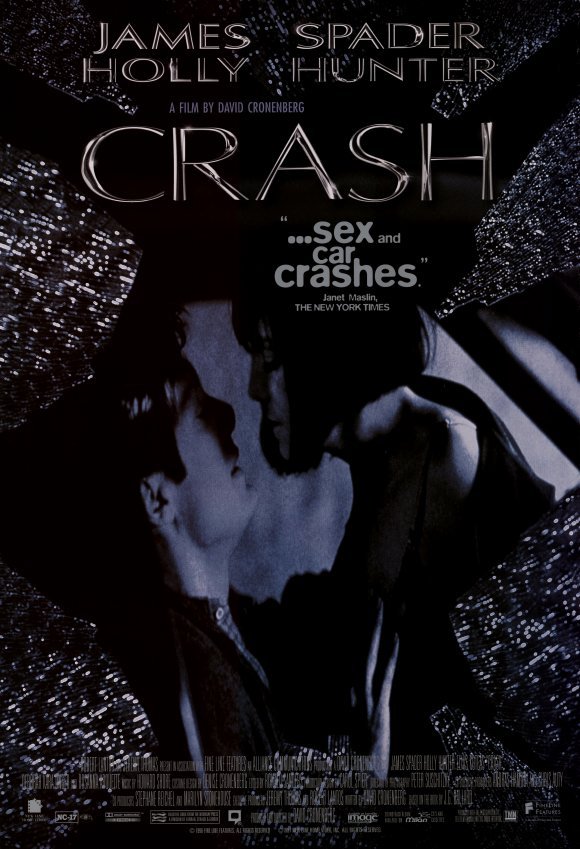