It was the 1958 Palm d’Or winner at Cannes and Tatiana Samoilova won the award for Best Actress. It came four years after Stalin’s death, and with the new head of state Nikita Khrushchev came a thaw in the cold war and an easing in censorship. This allowed filmmakers to expand from making only Marxist-Leninist propaganda films. One of the first Russian films to shoot for a story about regular Russians is Mikhail Kalatozov’s (“I am Cuba”/”The Red Tent”) moving melodramatic war movie; it’s adapted by Viktor Rozov from his own play. The black-and-white photographed film features great crowd tracking shots by cinematographer Sergei Urusevsky.

It focuses on the impact of World War II on a struggling middle-class Moscow family consisting of a soldier Boris (Alexei Batalov ), his fiancée Veronica (Tatiana Samoilova, the great-niece of Stanislavsky), his surgeon father Fyodor (Vasily Merkuryev) and his draft-dodger concert pianist cousin Mark (Alexander Shvorin). Also living in the same apartment is the grandmother (A. Bogdanova) and an ill-tempered old maid doctor relation named Irina (S. Kharitonova).

The opening scenes show the close love relationship between Veronica and Boris. He’s a dutiful factory worker, who patriotically volunteers when Germany attacks Russia in 1941. He delays telling Veronica, and when she learns she gets so angry that she misses saying goodbye during his farewell send off at home and at the assembling place for soldiers. Boris is shipped to the front, and she gets no mail from him. During an air-raid attack, Veronica’s parents die in their apartment after refusing to go into the subway shelter. Boris’ family take the orphan in, giving her Boris’ room. During another air-raid, Mark forcefully comes on to Veronica despite her slaps and shouts of “Nyet.” The self-hating Veronica marries him despite still loving Boris, as it’s implied she does so out of guilt and shame over the rape. She applies herself as a nurse for the war effort, and feels miserable about what she did to Boris and feels the bitter resentment directed to her by Boris’ family. Things come to a head when it’s learned that the wormy Mark is not only a rapist and an adulterer but got his exemption through graft by falsely using Fyodor’s name.

In the end, the family accepts Veronica as one their own and she leaves Mark. She learns to accept that Boris died fighting in the front when Boris’s friend Stepan, returning from the front, confirms his death. The plot is contrived like a Hollywood production, but the acting is first-class and the look of the film is marvelous. It also shows there are Russians who desire peace just as much as the West does, and those who demonize all Russians are making a big mistake.

The sentimental title comes from birds that fly in formation over a river at the beginning and end of the story, symbolizing Veronika’s romantic hopes and dreams. 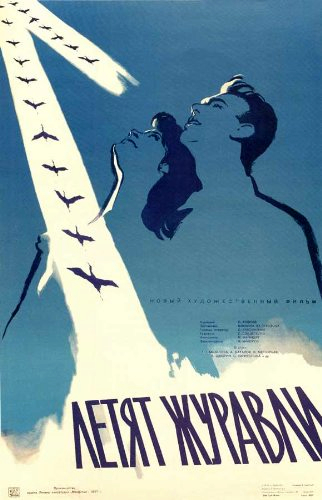