COW WHO SANG INTO THE FUTURE, THE

Chilean director Francisca Alegría uses magical realism as she tells of her country’s failing ecosystems and rightfully blames corporations and corrupt politicians for the polluted rivers of Chile. Her debut as a director of features, is a follow up to her 2017 short film “And the Whole Sky Fit in the Dead Cow’s Eye.”

In the opening scene, at a mystical forest, it’s photographed in lots of green and dark browns, in a trance inducing way by DP Inti Briones, as we hear the desperate songs of the fish, birds and cows who sense death is near because of the pollution.

We further learn of a pulp factory as a polluter of one of Chile’s precious rivers, and what emerges is a choir singing about a dead woman, who committed suicide, a long-lost mother and wife, Magdalena (Mía Maestro), who rises from the Cruces River (where she committed suicide by driving her motorcycle into it) and returns some time later to warn us, without speaking, about how we are doing bad things to our environment in which it may never recover. Her surgeon daughter, a single mom, Cecelia (Leonor Varela), returns to work at the rural family dairy ranch and nurses granddad (Alfredo Castro) after he envisions his dea d wife and gets a heart attack. Cecelia’s two children the eldest teen Tomás (Enzo Ferrada) and Alma (Laura del Río), are also with her. With Tomás conflicted about his gender (he wants to identify as a woman but mom won’t let him as long as he lives with her). Tomás has felt a strong kinship with his lost granny.

The well-produced and enjoyable arty fable is a mysterious and elegiac tale warning us about a collapsing ecosystem and about deep family wounds it causes when decisions are made without regard to how nature affects everyone now and in the future. 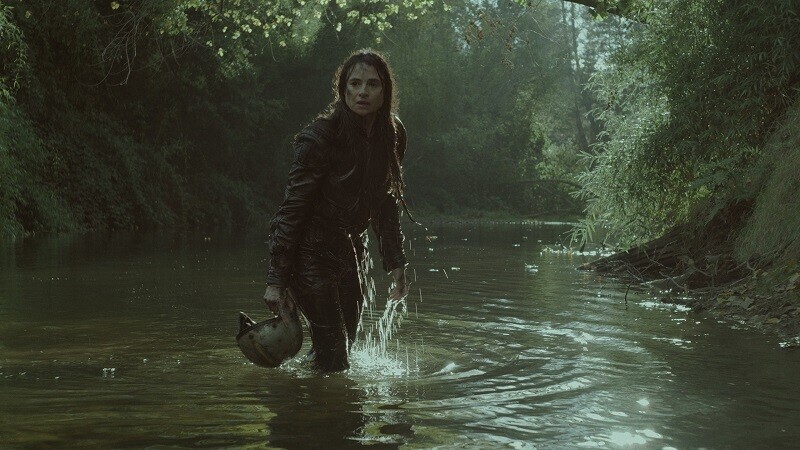