COOK, THE THIEF, HIS WIFE AND HER LOVER, THE

Eccentric filmmaker Peter Greenaway (“Drowning by Numbers”/”The Pillow Book”/”Prospero’s Books”) helms a highly stylized and elegant Jacobean revenge tale over adultery and jealousy that rolls against the taste buds like a mouth full of hot pepper. This shocker received an X rating, which was refused by the filmmaker upon its release (chooses instead to have the film unrated). Greenaway gives it an all too graphic violent lesson that behind civilization’s need for art and refinement there lies an insatiable appetite for cruelty and that even the most snobbish of the fine diners might just be hiding behind their sophisticated or pretentious veneer that they are only beasts at heart feasting on gourmet food to keep in check their more baser animal instincts. It’s Greenaway’s best known film, but is far from his best one though he keeps his signature trademark of being an enigmatic joker intact.

It’s framed around a brutal sadistic opening sequence and a concluding cannibalism sequence. In the opening scene coarse, foul-mouthed, racist and ruthless London petty crime kingpin protection-racketeer Albert Spica (Michael Gambon), with his henchmen, force a shopowner behind in his protection payments to strip naked and eat shit and then the Thief, Spica, urinates on the slumped over man. The boys then trek over to Le Hollandais, a French gourmet restaurant chef-owned by Richard Boarst (Richard Bohringer), a place where the crude upstart philistine loves to dine and show off his newly found good taste in front of his uncouth gang members and abuse his long-suffering wife Georgina (Helen Mirren). There Georgina meets regular restaurant patron Michael (Alan Howard), a scholarly and quiet Jewish bookseller, and they begin a secret affair where they do it in the loo and in the unseen back part of the kitchen. The French chef sees what’s going down, but offers no interference. When Spica discovers the affair, he tracks down Michael in his book depository and suffocates him to death by having his henchman Mitchell (Tim Roth) force him to eat the pages from his favorite book. Georgina retaliates by having the chef cook Michael as one of his experimental delicacies and she then forces Spica to eat him.

The film’s scatological depiction of the vulgar and totally despicable nouveau riche Thief and his gang of louts, has the savage bully as an ambitious social-climber hiding behind his newly found power and money not unlike many of the modern day pols, celebs and businessmen. If the film is appealing, it’s only through the unique way Greenaway cooks his disturbingly sumptuous meals in such exacting detail (using food as a metaphor for all sorts of things including twisted connections between eating and sex, love and death; he also has the restaurant wall dominated by a reproduction of a Frans Hals painting, whose 17th-century characters are ironically dressed in the same rich frocks as the Thief’s disreputable gang). Not for all tastes, especially not the squeamish. 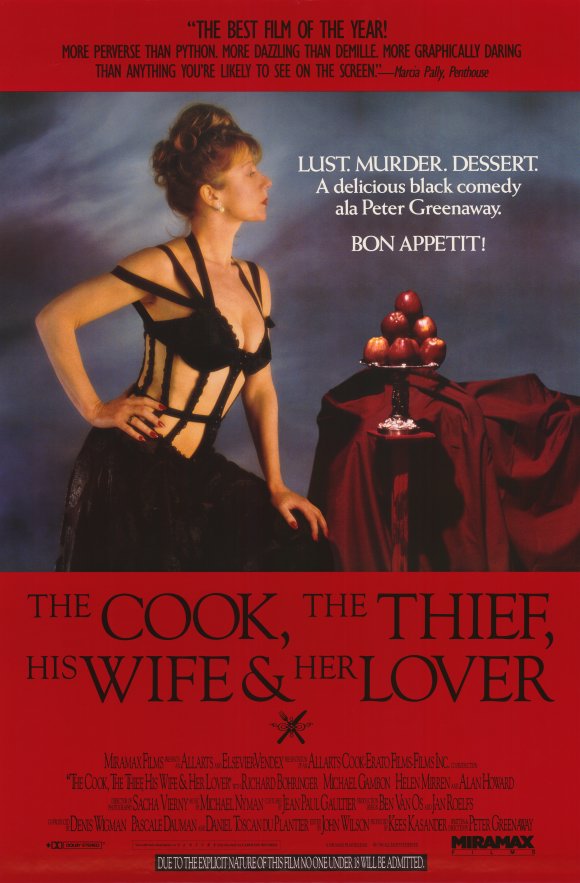