A Hong Kong comical martial arts film that works better than expected even if it doesn’t work.

The sleazy, wealthy Japanese businessman (Sahara Kenji) is assassinated in his Hong Kong office building while with geishas. We learn when he dies that he signed a contract before his death that a Revenge Fund be set up by his estate that will be administered to hire various international leading assassins to find the killer and for that receive a $100 million reward. A socially awkward army vet from the mainland, the broke Hong Kong street panhandler, Fu (Jet Li), attempting to become a hitman, gets hired by the fast-talking Hong Kong con man Norman (Eric Tsang), posing as an agent for assassins, to find the killer and receive a percentage of the reward. The dead man’s psychotic grandson Eiji Tsukamoto (Sato Keiji) is also hired even though family members were not invited to participate. The mysterious killer is known as the Killing Angel.

The police Lt. (Simon Yam) investigating the murder, invades the place all the assassins meet to get hired and thereby he gets an idea who are the assassins taking up the offer. Loud rap music throughout, poor dubbing and an absurd story, make it difficult to recommend.

But Jet Li and Eric Tsang have good chemistry together and there’s enough Jet Li martial arts in it to satisfy most his action fans.

GiGi Leung is easy to like as Norman’s lawyer daughter, who falls for Fu even though she’s engaged to a businessman from a respectable family.

It’s a pic with certain charms, just not enough for me. 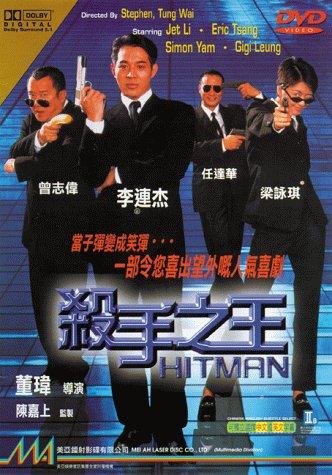