A Depression-era sophisticated screwball comedy directed by Gregory La Cava (“Stage Door”) that age has taken some toll on, though its whimsical winning nature still comes through. It’s penned by Morrie Ryskind (co-writer of the Marx Brothers’ A Night at the Opera) from the novel 1101 Park Avenue by Eric Hatch. It’s Carole Lombard’s best role ever. Co-star William Powell was in the early 1930s married to Lombard for a few years. The film gathered lots of Oscar nomination but no winners.

It opens with the wealthy NYC Park Avenue ditsy spoiled sisters of the eccentric Bullock family, the flighty Irene (Carole Lombard) and the mean-spirited Cornelia (Gail Patrick), going down to the city dump to find a ‘forgotten man’ for their socialite ‘scavenger hunt.’ Cornelia pounces on the erudite hobo Godfrey Smith (William Powell) and offers him $5 to come with her to the Ritz so she can claim her prize, but her snobbery turns him off and he pushes her into a pile of ashes. After Godfrey scares Cornelia away, Irene explains the game is for charity and if she can bring him in she will beat Cornelia for the first time. Scatterbrained Irene hires Godfrey as the family butler, and makes him her protégé. Her mom Angelica (Alice Brady) also has a protégé in freeloading live-in composer Carlo (Mischa Auer), as mom proves to be as nutty as her daughters. The only sane one in the family is the businessman father Alexander (Eugene Pallette ), who survives the menagerie by making with the wisecracks.

The butler is aided by the wise maid Molly (Jean Dixon), as he tries to be a good butler and fight off the advances from Irene, the hostility of Cornelia and the madcap atmosphere of the household. At a dinner party he’s recognized by Tommy Gray (Alan Mowbray) as a Harvard classmate and the scion of the wealthy New England Parke family. It’s learned he had a bad marriage and left all his money to his wife, and was so bitter and heartbroken he tried suicide in the East River but saw the down-and-out men optimistically living by the city dump and remained there to try and get over his self-pity. While straightening out the family, Godfrey straightens himself out.

There’s some social commentary, but it’s mostly an escapist feel-good fantasy pic tailor-made for the time. What still holds up are the zippy performances by the ensemble cast and the overall energy. But in telling about the different classes, its depiction is as empty headed as the usual Hollywood generalizations of the idle rich and the noble poor. 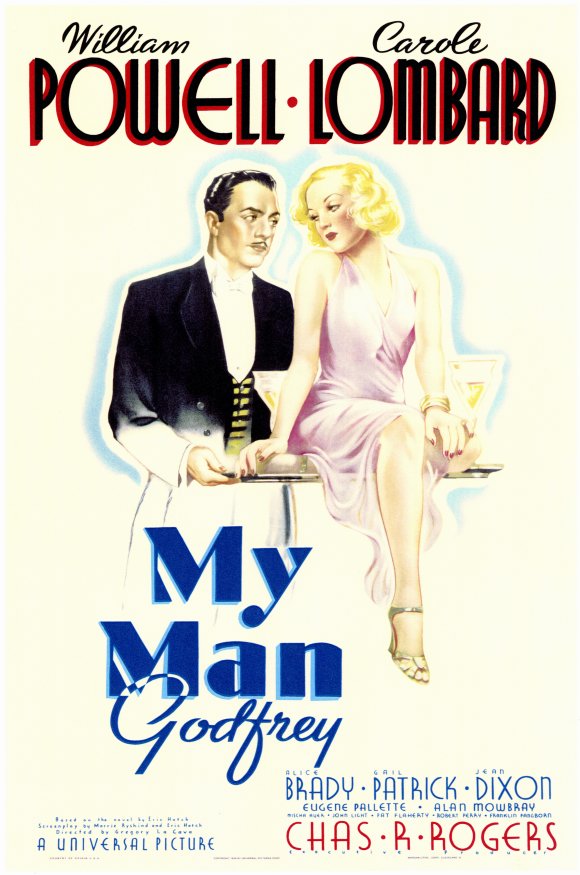