“The result is a stunning surreal film that remains unexplored in all the mysteries it holds, just like the river that flows in the city.”

Who would think from such a simple and absurd plot a near or perhaps an actual masterpiece would be created! Well, the Berlin Festival of 1997 did and awarded The River its top special jury prize. Also, the prestiguous French film magazine Cahiers du Cinema voted it one of the 10 best films of the 1990s. Malayasia-born and now living in Taiwan director/writer Tsai Ming-liang (“The Hole-1998“/”Rebels of the Neon God-1992“/ “Vive L’Amour-1994“) has created a highly personalized film that goes against the narrative grain of modern cinema. The River is Tsai’s third film and shows that he’s a true artist in this visually evocative study in urban alienation, despair and loneliness. He uses the dirty river as a metaphor, and relates how we misused the river and now our life is out of balance and we can’t find a cure for our ailments even through our ancient traditions and modern technology and science. This poignant but bleak film serves more as a means for provoking further thought than as entertainment. In fact, it’s hardly an enjoyable viewing experience (though I enjoyed it). Instead it grows immensely rewarding afterwards when you have time to piece together what the filmmaker is saying. It acts as a film that lingers on your mind long after viewing it and then upon further reflection the film’s intangible qualities slowly sink in. The film’s style is minimalism, and the story moves at a snail’s pace with long pauses of silence interrupted by fast scene cuts that give the viewer a chance to observe and bring to the table all their experiences. If you don’t bring your life experiences, you will more than likely walk away empty-handed and find it a snoozer–maybe even a perverted work. But I found it on the contrary to be a great work, a film that requires from one patience and a willingness to do most of the work oneself in digging out its buried gold nuggets.

Tsai Ming-liang has gone on to make films that are at last getting released in some chosen spots in America, and are at least available for the first time on video. His latest video releases besides The River are “Rebels of the Neon Gods” and “WhatTime is it There?”. Tsai is one of three Taiwanese filmmakers of high merit to burst upon the world stage during the 1990s and shake up the film world. The other directors are Edward Yang (“Yi Yi“) and Hou Hsiao-Hsien “(Time to Live and Time to Die“).

The film opens at an immaculately clean mall, where the presence of a McDonalds indicates that the Taipei location could stand-in for numerous other international cities. On the escalator a youth, Xiao-kang (Lee Kang-sheng), runs into a longtime young lady acquaintance (Shiang-chyi Chen) he hasn’t seen for awhile and she invites him onto the outdoor set of a picture being shot by real-life Hong Kong film director Ann Hui, where she works on the film crew as a production assistant. The director is using a dummy to float like a corpse in the river (Tanshui River) but is not satisfied with the takes because they look phony, so she sweet talks Xiao-kang into acting like a corpse with his head in the dirty water while he does the dead-man float. She then offers him a hotel room to wash up; later the girl returns to the hotel where she becomes intimate with him. But when he returns home, he develops from the pollution that can’t be washed off a painful crimp in his neck which he can’t shake.

What follows is an amazing tale of an alienated family living a hermetically sealed life in Taipei. The family is so isolated and psychologically sealed off from one another that it takes us the longest time to just figure out that Xiao-kang lives with his elevator operator mother (Hsiao-Ling Lu) and his despairing father (Miao Tien), probably a retiree, who sleeps in a separate bedroom and is in a loveless marriage despite it being one that is materially comfortable. His trim middle-aged Mother is having an affair with a guy who sells porno videos and who is indifferent to her advances, while his middle-aged father cruises gay saunas for anonymous sexual encounters. There’s also a leak from the father’s bedroom roof that is never repaired, but a plastic shield is used to divert the water to a drain and also a bucket is used to collect the water that spills down from the plastic covering. When the leak floods the entire apartment, the mother climbs into the empty apartment above her husband’s room and shuts off the faucet.

Meanwhile Xiao-kang’s mysterious neck injury is becoming increasingly more painful despite trying every sort of treatment available including — being hospitalized, visiting doctors, a medium, a spiritualist, trying an assortment of home remedies, machine massages, pampering, love massages from both his parents, and acupuncture treatments. Nothing works. In one sad scene that some might find amusing, Xiao-kang’s father is on the back seat of his motorbike and has to hold his son’s head straight for him to steer it while he’s in so much pain.

The film ends just as unresolved as it began. After the hand-job incident father and son sleep in the same bed in a suburban hotel room outside of Taipei. At 6:30 in the morning the father phones a spiritual healer about the promised cure for his son. This comes after they visited his temple and the healer asked for time to meditate on it. He now advises him to return to Taipei with his son and see a doctor, saying there is no longer a need to consult him anymore. The father goes downstairs for breakfast, and Xiao-kang gets out of bed and steps out onto the sun-lit balcony.

In Tsai’s view things have gotten so out of hand because of modern society’s malaise, that even in a crowded city people barely make contact with another and walk around isolated in their own fantasy world. Materialism and one’s selfish needs rule every aspect of life, whether it’s in the arts, the world of medicine, spiritualism or whatnot. Everyone in an impersonal way uses the other person to get what they want, as a porno movie is not that different in theme from a legit film that must use a river polluted by industrial waste. One’s reality is based on fiction and therefore everything becomes futile — from basic pleasures in sex to not noticing others in the street except on occasions when it can’t be helped. For Tsai modern man’s problems start and end at home, and their vibes help create the environment. This family takes their lack of communication to extremes. They hardly ever converse with one another and never in a friendly manner, and the family never dines together and they all sleep in separate rooms. The result is a stunning surreal film that remains unexplored in all the mysteries it holds, just like the river that flows in the city.

This one’s a classic. 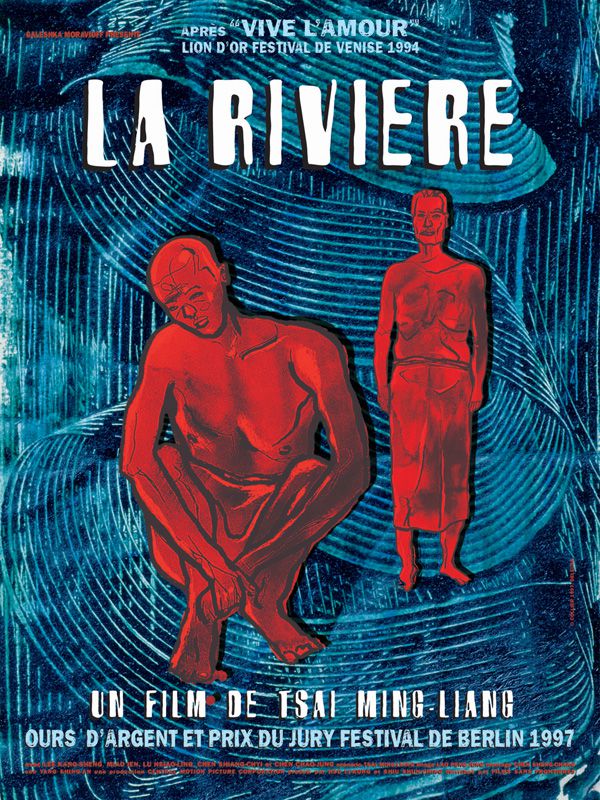