An unrewarding and overworked melodrama in the form of an allegory by legendary Polish director Andrzej Wajda (“Ashes and Diamonds”) that only works in parts but fails to resonate as a whole. The screenplay was based on conversations with Andrzej Markowski and was written by Andrzej Kijowski.

Jan Lasocki (John Gielgud) is an ailing eighty-year-old Polish émigré who left his country fifty years ago when his first love rejected him. He’s a world famous conductor living in New York City, who is grouchy because he’s constantly followed by reporters and photographers. Marta Pietryk is on a musical scholarship for three months in New York City. She’s a young married violinist, with limited talent, who is from Jan’s hometown. Her mother was the violinist who spurned Jan and broke his heart when she married Marta’s father. When Marta meets Jan, he’s overcome with nostalgia and against his agent’s wishes cancels his Paris concert to visit his Mazovian birthplace–seemingly to die in the place he was born. His visit causes Marta’s jealous husband Adam to become uptight. Adam is a hack conductor of the mediocre provincial orchestra in his hometown, that’s sponsored by the government. To honor the international celebrity on his visit, Jan’s invited to conduct Adam’s orchestra in a world-wide radio broadcast of Beethoven’s Fifth Symphony. During the practice sessions, the orchestra takes to his gentle ways and love of music as opposed to the stern Adam always railing at them and showing no love for them or the music. Adam is an ambitious young man, who uses the music only to further his career, while Jan is viewed as a true artist who plays for the love of music. This scenario gives Wajda a chance to weigh in on the argument of the artist over those who use artists for their own interests and the socialist country’s fawning over the star system. In a heavy-handed manner the film-maker shows how the inferior Adam cracks up, his marriage goes on the rocks, and how the government schemers muck things up further by trying to replace some of the local musicians with ringers from the superior Warsaw orchestra.

Everything seemed out of step, not the least being Gielgud’s virtuoso performance against the backdrop of an uneven supporting cast. The allegory was never fully realized, becoming mired in a muddled narrative, trite speechifying, oversimplified depictions of culture shock between a sophisticated Manhattan and a unsophisticated country town in Poland, and finally done in by a poor dubbing job of English (Gielgud wasn’t dubbed in English). It had the look and feel of a B film; one of Wajda’s more forgettable works. 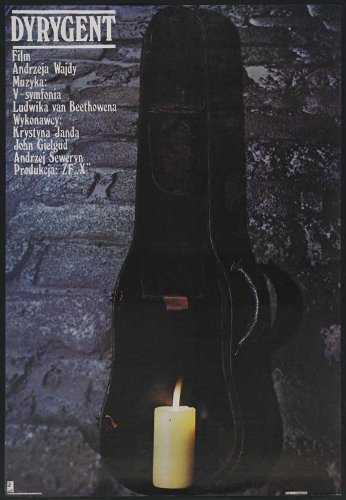