“It’s all fizzle and no punch.“

A smart-looking lightweight psychological puzzler directed by the longtime France-based Chilean exile, the acclaimed and always busy Raul Ruiz. Comedy of Innocence is adapted from the book Il Figlio di Due Madri by Italian surrealist Massimo Bontempelli. The film was co-scripted by Ruiz and Françoise Dumas. It’s all fizzle and no punch, packing not enough juice to quench the thirst of those cinephiles who have not acquired a taste for the surreal. It’s one for the arthouses.

In an old, big, and luxurious Paris house filled with statues and neo-classical paintings, a rosy-cheeked, round-faced lad, Camille (Nils Hugon), is celebrating his 9th birthday with his bourgeois parents, painter mother Ariane (Isabelle Huppert) and businessman father Pierre (Denis Podalydes). Arriving late is his childish psychiatrist uncle, Serge (Charles Berling), the brother of Ariane. He also lives in this place, which has been in his family for generations. Camille is an older than he seems gifted child whose hobby is making films on his video camera and who possesses a flare for the unworldly, as he appears to be having a conversation that no one else at the kitchen table is aware of with a supposedly imaginary child named Alexandre standing outside in the garden. He stuns his mother by saying his name is Paul and rejects her as his real mother. The next day when his father leaves on a business trip, the cherubic smiling Camille insists on taking his asthmatic mother across town to an arty section of Paris she’s unfamiliar with to meet someone he claims is his real mother. He locates the apartment of a violin teacher named Isabelle (Jeanne Balibar), a mentally unbalanced patient of Serge’s, who is not home but the busybody neighbor (Scrob) shows them into the apartment filled with African tribal artifacts. The next day Isabelle who lost a son named Paul in a drowning accident off a barge two years ago, who would now coincidentally also be 9, visits Ariane and the boy acts like he’s at last with his real mom.

From this stretch of a story about a confused child, a case for the incredible is built. If the viewer is like me, they would be scratching their head how this irrational conflict could be dealt with in such a calm rational manner by the participants. Camille upsets his mother greatly as he starts calling her by her first name. This leads to a series of strange events, where the child is torn between two competing mothers offering their love. Ruiz raises the following question in all seriousness: Is it possible to have two mothers? And then there are questions about the film’s many other questions, as this viewer asks: Has this child gone off his rocker? Are we talking reincarnation? Where is Freud when we need him? I guess the point of this conundrum is to challenge reason and reality and identity.

“Innocence” never quite leaves its conventional grounded genre roots, as after a few twists the soothing ending is also delivered in a conventional way. There’s a showing of a print of The Judgement of Solomon hanging on Ariane’s wall (with the biblical moral being that the mother who loves her child most is willing to give him up). A point made about the brother and sister adults getting upset and acting like children when others play with their toys and a clever resolution with the proof being in the videotape, as Ruiz puts this baby to bed with a number of revealing allegories and mind games. All we needed to complete the pseudo-intellectual tale was a movie analyst saying let’s go to the Freudian videotape on myths. At least we were presented with a well-crafted chilling surreal tale in the style of Buñuel, but one that unfortunately evokes no feelings for any of the seemingly distant characters and no real emotions are revealed that can be believed. The two lead actresses make the best of this sketchy work, as the vulnerable brooding Huppert and the buoyant Balibar sail into their twisted opposite roles with a playful taste for the bizarre. 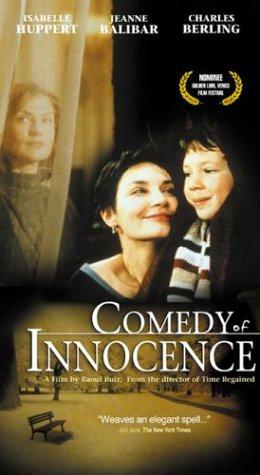