Robert Montgomery is the star and writer-director of the one of a kind film noir Ride The Pink Horse. It was based on a book by Dorothy B. Hughes. Ben Hecht and Charles Lederer supply the crisp screenplay. It was remade by Don Siegel in 1964 as a made-for-television movie called The Hanged Man. It should be noted that the antique Tio Vivo Carousel built in 1882 in Taos, New Mexico, was the model for the carousel in the novel Ride The Pink Horse. This same carousel was purchased by Universal-International and it was shipped to the set where it was reconstructed and used in the film.

Gagin (Robert Montgomery) is the last name of a hard-nosed weary ex-GI who never reveals his given name and remains a mystery person throughout the story. He arrives in the small Mexican town of San Pablo as the community is preparing its annual fiesta. He plans to confront and extort money from a gangster named Frank Hugo (Fred Clark) as retribution for the death of his best friend Shorty. While Gagin is hanging out in his hotel for Hugo to arrive, an FBI man Bill Retz (Art Smith) approaches and asks him to deliver the incriminating information he has on the gangster so that the government would have a case to prosecute the mobster. The secretive Gagin has other plans than prosecuting the mobster and when not able to shake the FBI agent, he takes refuge at an old carousel owned by the kind-hearted Pancho (Thomas Gomez). He meets there an alluring Indian teenager named Pila (Wanda Hendrix) who refuses to leave his side despite his efforts to discourage her. The girl witnesses when the morbid gangster catches up with Gagin and has him beaten in an attempt to kill him. She and Pancho nurse Gagin’s wounds, but cannot stop him from confronting the gangster again when he regains his strength. This time Gagin gets the better of the mobster but is tricked by his henchmen, fortunately Pila alerts the FBI agent and Hugo is slain.

In this stylishly presented complex psychological melodrama, Montgomery invokes a character of brooding silence: displaying a mood of conflict with himself and his environment. To him all the horses in the merry-go-round look alike. So when the girl asks which one to ride, he tells her “you might as well ride the pink one.”When the curious Pila questions him about making no choices in life, he tells her: “I’m nobody’s friend.” The film defines itself through its embittered loner character played by Montgomery. It is fueled by Gagin’s hatred for Hugo, as Hugo becomes the focal point of Gagin’s alienation and hatred of society. It is only when Gagin connects the carousel with a sanctuary that he begins to become human again, as he realizes that he must make choices as whether to self-destruct or seek salvation–a typical film noir confrontation for its protagonists. 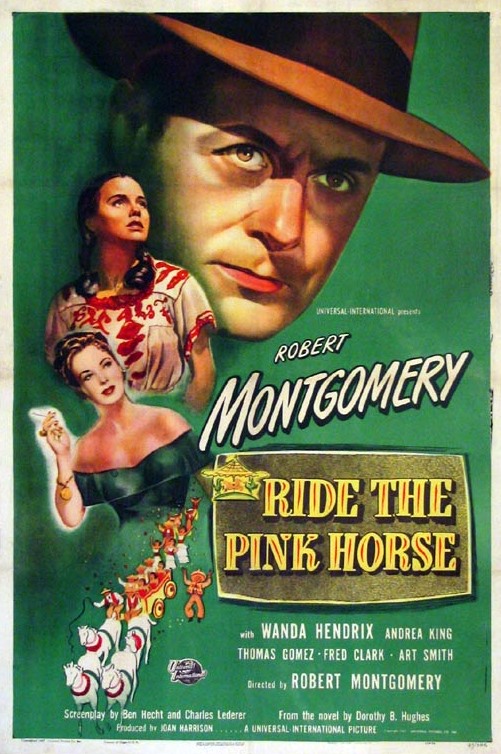