“There’s little room to see The Circle as anything but a way all Iranian women are kept as prisoners.”

The film asks the following: How do you escape from totalitarian Iran? The film’s theme is about how women are made to suffer in Iran because of its harsh Islamic laws against them, which makes all of their lives placed in the same never ending circle of repression. Which is why the film has no main protagonist, since it’s about all women as prisoners of the system; the cast, except for Fereshteh Sadr Orafai and Fatemeh Naghavi, are all nonprofessionals. Jafar Panahi (White Balloon/The Mirror), a disciple of Abbas Kiarostami, has created a restrained political film. A winner of the Golden Lion at the Venice Film Festival. It has been banned in Iran except for a one-time screening to a small student audience. It got an international release, and has been well-received in all the countries.

It is a neorealism film filled with an ominous tenseness that begins with the opening dark scene at a hospital maternity ward when a grandmother is told that her daughter’s child is not a boy but a girl and she reacts with horror, saying that her daughter’s in-laws will never accept the child and will seek a divorce. She wonders how the ultrasound could be wrong in predicting a boy.

A woman’s life is shown to be not as worthy as a man’s in modern Iran. Some women prisoners have just escaped or have a temporary pass from jail. The story of one woman is carried on as the story of another woman’s. So we never follow one protagonist, but a myriad of disenfranchised women; and, we are never sure what they are up to or where they are going, but they are all troubled because they are unescorted and have no man in their life.

Outside the hospital we leave the ruffled granny and follow three edgy women clad in black chadors, who just came out of prison on temporary passes and plan not to return; one of them is on the street booth phone trying to get money for transportation to some place far from Tehran. The other one tries selling a gold chain to a man who tries to steal it. She’s taken into custody by the police while the man is released. The two others flee the area immediately; they are very nervous types who keep changing their plans leaving us unsure of where they are going and what they are up to: Nargess (Mamizadeh) is an 18-year-old with an unexplained purplish bruise under her eye, who is captivated by an imitation of a van Gogh picture she sees on the busy street. Nargess thinks it’s a picture of her country neighborhood, but that the artist forgot to put flowers in certain spots. The older woman, the pock-faced and always gazing hawk-like Arezou (Almani), might have secured the money by turning a trick, money she uses for bus fare for herself and the country girl. But when it comes time to get on the bus, Arezou for some reason can’t and sends the reluctant teenager on alone to her hometown. Nargess can’t purchase a bus ticket because she’s a woman without an ID card and without an escort, but she talks the reluctant ticket seller into believing she’s a student who left her ID card home. But for some unexplained reason she goes to buy a man’s shirt and misses the bus to her paradise location. This comes after she tries unsuccessfully to contact a pregnant woman, Pari (Orafai), who escaped from jail but can’t return home because her parents kicked her out for being unmarried and pregnant. We learn that Pari escaped from prison to get an illegal abortion, as Iran doesn’t allow for abortions without the approval of the husband. Pari’s pregnancy is explained as occurring when her husband was executed 4 months ago and she was allowed one last visit.

We follow Pari as she makes contact with her ex-prison cellmate, who now works as a ticket seller in a movie theater. She accepts that her husband took another wife while she was in prison, as she proudly proclaims she’s still the Number 1 wife. Pari is given the address of her other ex-prison friend, Elham (Saboktakin), who works as a nurse in a hospital. She hopes through her contacts that she’ll secure an abortion for her. But her friend refuses to help, telling her she married a Pakistani doctor and he knows nothing of her past. She does not want to ruin her current marriage by disclosing anything else about herself. This is a crushing blow to Pari, who has no one else to turn to. On the street she feels pity for a girl who is being abandoned by her mother (Naghavi), but when she talks with the mother she sees how torn she is about what she’s doing and only tries to talk her into getting her child back. Everything about this Iranian regime smacks of an unfeeling attitude towards women, leaving them with little hope. The only hope is shown by a wedding party: the wedding for the woman, at least, starts out as a joyous experience.

The most powerful scene in the film is the arrest of a young prostitute, Mojgan (Faramarzi), who is wearing makeup and got into the car of a male. Mojgan’s arrest comes at the same time as the mother who abandoned her child gets into the car of an unmarked police car and is arrested, but who escapes when the police get involved with the arrest of the prostitute. When the prostitute is put into the paddy wagon and carted off to jail, she tries to smoke a cigarette. But the police guards tell her there is no smoking. This is a running gag throughout the film, as women are not allowed to smoke in public but are always trying to sneak in a smoke. When the male prisoner offers the guards a free cigarette he’s allowed to smoke, which encourages the prostitute to freely puff away. Mojgan feels a release of frustration, as the smoke comes rapidly out of her mouth. It is these small acts of rebellion that give these women some hope, and what they share with the audience is a camaraderie with them against their oppressors.

Our enemy obviously isn’t the Iranian people, but an intolerant government that cannot bend and forces its rules down a subjected peoples’ throats. This film conveys these dark feelings through a story without much of a plot or dialogue, yet brilliantly establishes the yearnings for freedom that these women have. It’s much like those Warner Brothers films of the 1930s with Jimmy Cagney thumbing his nose at the high brows. Panafi has taken us into the psyche of the oppressive regime and without saying what’s right or wrong, allows us instead to see for ourselves the everyday streetlife of modern Iran. It’s a country far from freedom, yet its filmmakers can still make a film that is unpredictable and forthright. This is something that’s rarely accomplished in uncensored Hollywood whose commercial ventures are mostly formulaic crowd pleaser films.

The women featured remain mysterious: we are never told what crimes they are charged with. All we see are the repressions they are faced with: no smoking in public, no abortions, they can’t enter certain places without a chador, they can’t get hotel accommodations without IDs, and they can’t even buy a bus ticket when alone. These are amazing restrictions placed on them and ones that Panafi allows us to see in an unforgettable way. It’s a moody, realistic tale about Iran that the news media can’t seem to cover with a reasonable verisimilitude as well as this very daring effort does. There’s little room to see The Circle as anything but a way all Iranian women are kept as prisoners and how their stories of repression continue from one woman to another. When we lose sight of one woman, the next woman’s story could be just as horrendous. This is one film that cannot easily be forgotten, even as we lose sight of the women. All the performances were natural. The facial expressions of both Orfani and Mamizade were attention grabbing: Orfani had that caring, intense look of the Italian actress Anna Magnani; while Mamizade’s expression changed from curiosity to vulnerability. Mamizade seemed to have a radiance that lit up the screen and best caught the desperation of their situation. 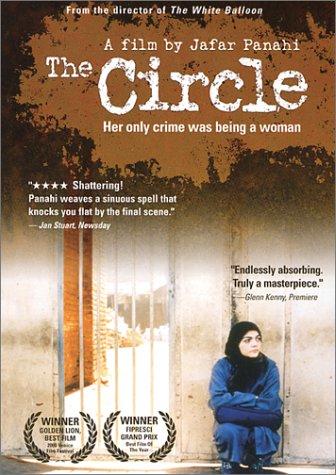