“The first western to win an Oscar for Best Picture.”

Wesley Ruggles (“I Met Him In Paris”/”London Town”/”The Fourflusher”) passionately directs the most successfully acclaimed western of the early talkie era (it was made on a $1.5 million budget by RKO, the largest ever for a film of that period, and though it received rave reviews it nevertheless lost more than half a million dollars) and the first western to win an Oscar for Best Picture; the next western to win didn’t come until 1990 with Dances with Wolves. It’s badly outdated, overly sentimental, the performance by Richard Dix that was well-received back then now seems overblown and it’s embarrassingly filled with stereotyped characters such as a Jewish tailor (George E. Stone) and a Negro servant (Eugene Jackson). The epic western covers the frontier years in the Oklahoma Territory from 1889 to 1929 and the fight for statehood. It’s based on Edna Ferber’s popular 1930 novel. The uneven film is filled with a few spectacular scenes, such as the famous land rush on horse and wagon on the two million acres opened to settlers by President Harrison in April 22, 1889 in the Oklahoma Territory.

Yancey Cravat (Richard Dix) is an adventurous lawyer and newspaper editor from Wichita who ventured to the Oklahoma Territory in 1889 for the land grab, but the devious Dixie Lee (Estelle Taylor) steals his claim to the valuable Bear Creek land when during the race she tricks the chivalrous Yancey to help her when her horse stumbles and thereby steals his horse and he doesn’t have it in him to shoot a woman.

Back in Wichita, Yancey answers his snobby mother-in-law’s (Nance O’Neil) insults by taking his loving wife Sabra (Irene Dunne) and his toddler son Cimarron (meaning wild and unruly) back to the Oklahoma Territory to start a newspaper in the rough and tumble boomtown of Osage. The family is helped by their faithful young black servant Isaiah (Eugene Jackson). Soon after his arrival Yancey confronts local bully outlaw Lon Yountis (Stanley Fields) with the murder of the newspaper’s previous editor and effectively deals with him when firing back in self-defense and putting a bullet in his chest. Yancey’s newspaper develops a good rep for its honesty and courage, and becomes a rich part of the growing community.

In 1893, a new “Cherokee Strip” land rush takes place and the restless Yancey deserts his family to participate in it. Sabra remain at home and is greatly helped in running the newspaper by printer Jesse Rickey (Rosco Ates) and tailor Sol Levy (George E. Stone). In 1898, Yancey returns to Osage as a Rough Rider and successfully defends his former enemy Dixie, who goes on trial for prostitution. Yancey believes she’s basically a good person who has been a victim of circumstances. In 1907 Oklahoma becomes a state and there’s an oil boom. Yancey refuses to be part of a scheme to cheat the Indians out of their oil rich land and, before disappearing again, publishes an editorial urging citizenship for all American Indians.

After more melodramatics such as those involving Sabra’s son marrying an Indian over her objections, forty years pass since Yancey founded his family newspaper. The politically active Sabra is elected as Oklahoma’s first Congresswoman, becomes more tolerant of Indians and wishes to honor her long-lost husband with a statue for being a boomer state pioneer. But it’s soon learned that Yancey, now a drifter, died a hero trying to rescue oil drillers trapped in an explosion.

The sprawling western saga has an elegant look and tells an earnest soap opera tale about empire building, but when viewed today too many of its weaknesses override its strengths. It was remade in Technicolor as Cimarron (1960) with Glenn Ford. 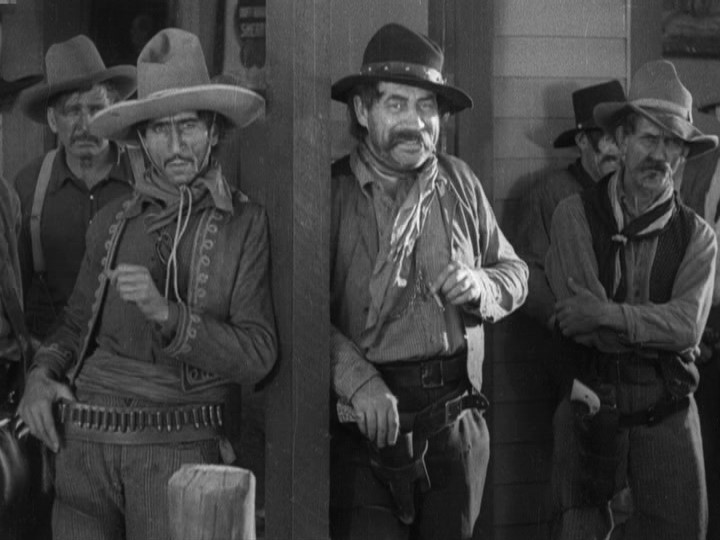