“Rebecca Hall is agonizingly good in this grim character study, based on a true story.”

Rebecca Hall is agonizingly good in this grim character study, based on a true story. It impinges on feminist issues and what it takes to be a famous media person in the age of sensationalized news. Her character’s career and personal life are spiraling out of control down a dark side, even as she is determined to make her mark in the news field. Antonio Campos (“Buy it Now”/”Simon Killer”) directs and Craig Shilowic writes the screenplay with a fair amount of sternness, as both refuse to make their stressed-out protagonist into a martyr. In 1974, during the Watergate days, the virgin 29-year-old smart but troubled Christine Chubbuck (Rebecca Hall) has been working for the past year as a field community reporter for the local TV station in Sarasota, Florida, after a meltdown on her Boston gig. The ambitious reporter, the smartest one in the room, has a contentious relationship with the producer, Michael (Tracy Letts), who worries about the falling ratings while urging her to give him juicier stories and not her usual social justice “think pieces.” Plagued by self-doubt, a messy apartment sharing arrangement with her dependent single mom (J. Smith-Cameron), and medical concerns that affect her child-bearing, she softens her outward pose and begins a friendship with the lightweight George (Michael C. Hall), the news anchor, who gets her involved in group therapy sessions he’s part of. But the romance or his help with her career moves are never realized, as the blame for her downfall turns out to be more about herself than the world.

Warning: spoiler. The film doesn’t exploit her mental angst and mood swings, as it delivers the shocking story of the first person to commit suicide on live television without sensationalizing it. 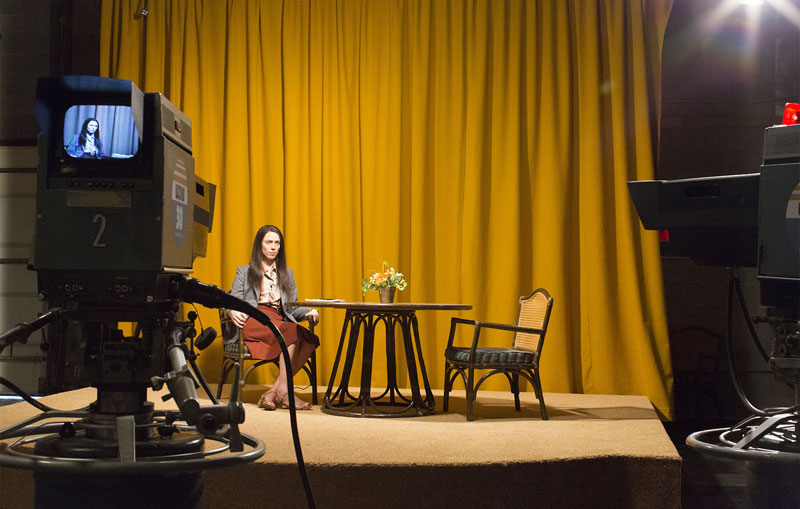