“Everyone speaks in pidgin English with thick Russian accents, which reduces the flick to an unintentional farce.”

The Russian thriller is based on the best selling debut novel from British writer Tom Rob Smith. Swedish director of Chilean origin Daniel Espinosa(“Easy Money”/”Safe House”), helms the true story in a bland manner, while screenwriter Richard Price turns in a weak script. Everyone speaks in pidgin English with thick Russian accents, which reduces the flick to an unintentional farce.

It’s hard to reconcile that the film is so terrible, considering it’s adapted from such a worthy novel and has such a fine cast of stars and supporting players.

It’s set during the days of Stalin in 1953 where Red activist Leo Demidov (Tom Hardy), of the Russian secret military police, investigates a series of boy murders. His unsettling investigation reveals a cover-up and a conspiracy. He therefore faces the wrath of his superior, the evil Vladimir Malevich (Paddy Considine) and his manipulative government agents. Vladimir demotes Leo and sends him and his wife (Noomi Rapace) to a remote work camp. Even the camp general supervisor (Gary Oldman) fears he’s being threatened by those in high positions who want to remove him from his post because they suspect he’s not a true believer like they are in the regime.

The film purports to show that the Soviet Union during the post-war period was like living in hell for the masses, who were subject to numerous purges. It plays out like a Cold War propaganda piece for the West, showing how horrid was the Communist system. Even the manhunt for the serial killer never becomes engaging, as the $50 million Ridley Scott production never gets on the right track. Of note, the Considine character was based on the real-life Russian serial killer Andrei Chikatilo. 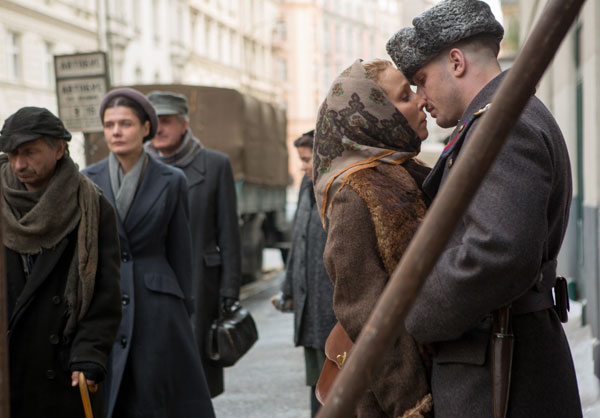 MAN WHO INVENTED CHRISTMAS, THE

WHERE THE TRUTH LIES

STEAMROLLER AND THE VIOLIN, THE