“A routine musical B Western, only worse.”

A routine musical B Western, only worse. It’s weakly directed by Ray Taylor (“Law of the West”/”Outlaw Country”) and weakly written by Joseph O’Donnell. Celebrated gunfighter Eddie Dean arrives in the lawless frontier town of Red Gap, Colorado. When Sheriff Clark (Edward Cassidy), whose guns are in his holsters, is gunned down in the street by Ace (Mikel Conrad), as his gang recklessly shoots-up the town, the outlaw escapes but a few of the gang are locked up by Eddie. As a result, Soapy (Roscoe Ates), the barber/deputy, talks Dean into being sheriff. His first order of business is posting an ordinance for everyone to check their guns in town. The villain is Brad Taggart (Stan Jolley), who is a land-grabber. His gang got away with the murder of the Lazy J ranch owner. His daughter Cathy Jordan (Nancy Gates), a friend of Dean’s, complains that Taggart beat the murder rap and that he’s aided by the crooked Judge Hammond (Bill Fawcett). Dean solves the crooked judge problem by running Hammond out of town, while Cathy convinces her old friend, the honest Judge Walsh (Steve Clark), to become Red Gap’s new judge. Dean must cope with a stage-coach robbery by Ace’s gang, take down two gunslingers imported by Taggart and the surprise that the banker Farrell (George Chesebro) is the big boss and tricks him into a gun duel where Taggart while out of sight tries to blind him with a mirror as the banker draws on Dean. After cleaning up the town Dean and Soapy ride off into the sunset, with Dean crooning to Cathy that “you’re as pretty as a palomino.” 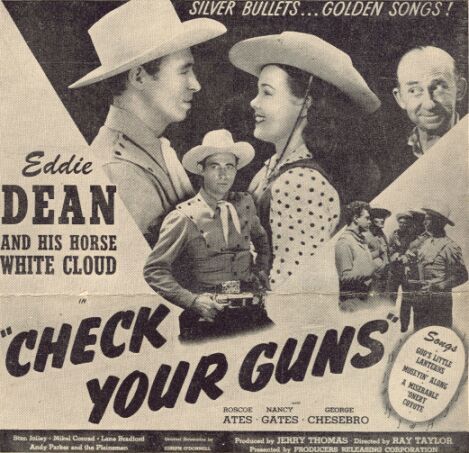