“An entertaining doc on the volatile but great jazz and rock drummer, the controversial London born Ginger Baker.”

Jay Bulgerdirects an entertaining doc on the volatile but great jazz and rock drummer, the controversial London born Ginger Baker. The pic’s opening shot has the cranky 73-year-old drummer, on the last day of filming, delivering a blow with his crutch to the fanboy director’s nose and chasing him away with a bunch of expletives from his gated home in South Africa (that posts on the gate a sign that says Beware of Mr. Baker). We will later learn Ginger’s tirade is because he felt Bulger was betraying him by going behind his back to get interviews from his family, his friends, ex-band members (multi-instrumentalist Steve Winwood, guitarist Eric Clacton & bassist Jack Bruce) and other musicians (like Charlie Watts, Rolling Stones drummer) after he told the kid his personal story.

The pic was made after the unrecognized writer/filmmaker Bulger bluffed his way into getting a candid interview with the bawdy Ginger by pretending to be a reporter for Rolling Stone and then ironically selling the story to the magazine.

Musician and filmmaker hustler formed an uneasy film partnership, with a testy Ginger freely running through his raucous bio and how he fell in love with drums at an early age while nicking records and by listening to a great jazz drummer like Phil Seamen knew he had the timing to make the drum special. His brilliance on drums would for the first-time in rock music allow for solo drum riffs and raise the drum to new heights in the evolution of rock.

Ginger candidly talks about his heroin addiction and its role in his music, of being a pioneer in bringing a new way to play the drum, of being a terrible family man who abandoned his English wife and three kids, his electrifying two years with rock’s elite group Cream (1966-68) and then a following year with the super rock group Blind Faith. The loveable rogue, with the wild red hair, a madman and not an easy person to get along with, spent time in LA, Hawaii and Jamaica, and left England in the 1970s to live and work in Lagos, Nigeria. There Ginger built a studio and hung out with the politically aspiring popular revolutionary Afrobeat musical artist Fela Kuti. After his fall-out with Kuti over his interest in polo, the pic follows Ginger’s downward spiral as he returns broke to London in the late 1970s and does not again play with a super band. In conclusion, we see perhaps the world’s greatest drummer at some sort of peace in his South African enclave, where he lives with his much younger African wife, his fourth wife, her many kids and his many polo horses, and survives some serious health concerns.

The pic nicely gets by with its juicy interview of Ginger and those who knew him don’t mince words on what they think of him, plus there are still photos and archival footage and, best of all, sequences of an animated Ginger doing his thing on drums. 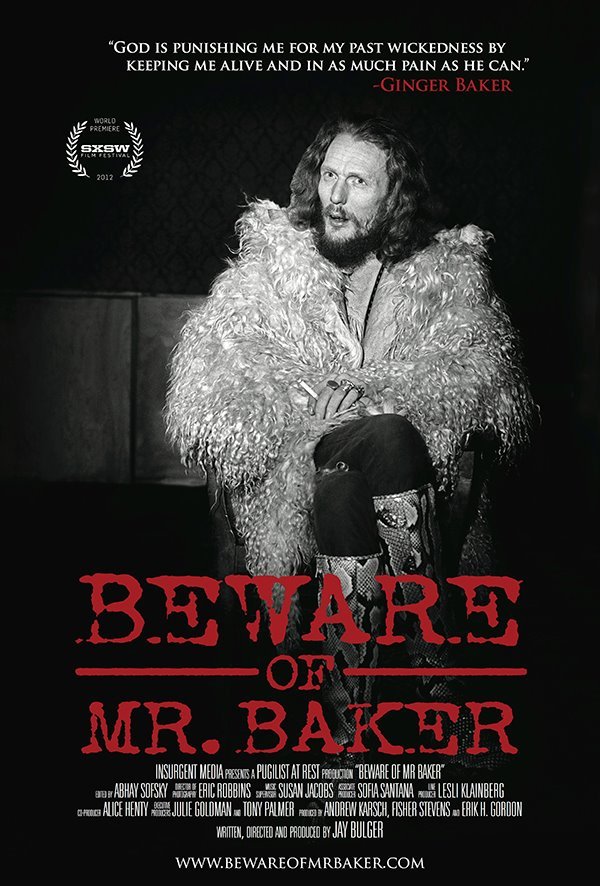