John Carradine is the suave Dr. Sigmund Walters, a mad scientist who runs Crestview Sanitarium where he does secret unsettling experiments involved in gland research that defy nature. His patient, Dorothy Colman (Martha MacVicar), is afflicted with some kind of incurable disease. She’s the sister of circus secretary Beth (Evelyn Ankers), who is engaged to circus animal trapper and trainer Fred Mason (Milburn Stone). He returns after a two year trek to the jungles of Africa with 20 lions and 20 tigers and an intelligent ape called Cheela. Walters decides to use the ape for his latest experiment and has the recently fired drunken abusive animal handler for the circus, Gruen (Paul Fix), steal the ape and then has the ape strangle Gruen to death. Dr. Walters transforms the ape into a woman by using gland tissue extractions from Dorothy and then Nurse Strand (Fay Helm). He names the creature Paula Dupree (Acquanetta-though born on a reservation in Wyoming and raised in Pennsylvania, her background was South American which led to her nickname, the Venezualan Volcano). When Walters brings the human looking Paula to the cage to watch Fred train the animals for a novelty act of having the lions and tigers in the same cage, she saves Fred’s life by going into the cage and scaring away the lion who is about to attack the fallen trainer. John Whipple (Lloyd Corrigan), the nervous owner of the circus, follows Fred’s recommendation and hires Paula to stand outside the cage to control the big cats by eye contact while he performs inside the cage. The problem is that Paula has fallen in love with Fred and when he kisses Beth, Paula goes into a jealous snit and reverts back into an ape and a killer.

Though it clearly defies reason, the lively thriller has a fine sinister performance by Carradine and a crazy tale to spin that is strangely palpable. There’s lots of recycled footage of Clyde Beatty from the 1932’s The Big Cage, where he’s taming the big cats. 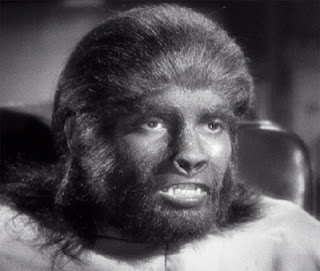 MAN WITH A MOVIE CAMERA, THE