An historically inaccurate tale about the infamous 17th century pirate captain William Kidd. The modestly budgeted film sails the high seas on Charles Laughton’s sea legs, as his sly ruthless portrayal of Captain Kidd gives this film its force. But it promises more action than it delivers, as it bogs down with too much chatter to be thought of as anything more than passable entertainment. It’s written by Robert N. Lee and Norman Reilly and adequately directed by period-drama veteran Rowland V. Lee (“Tower of London”/”The Bridge of San Luis Rey”/”The Three Musketeers”).

Captain William Kidd (Charles Laughton) attacks Admiral Lord Blayne and The Twelve Apostles, H.M.S., off the coast of Madagascar, and kills Lord Blayne and sets the frigate on fire. The pirates then bury their stolen treasure in a cave on a small island off the Madagascar coast. Three years later, in London, Kidd audaciously presents himself to King William III (Henry Daniell) as an honest captain based in New York and offers to escort the treasure-filled Quadagh Merchant on its upcoming voyage to Madagascar through pirate-infested waters. He then convinces the king that his crew should be made up of condemned pirates from Newgate Prison who are to receive a royal pardon in exchange for their services on the dangerous trip. Kidd also says that if he can prove that the missing Admiral Blayne turned to piracy, as has been rumored, he should take over Blayne’s crest and estate. The king, not realizing he’s dealing with a brigand, agrees to Kidd’s plan, and the captain with his cutthroat right-hand men Cyprian Boyle (Sheldon Leonard) and Jose Lorenzo (Gilbert Roland) arrange to have the imprisoned pirates released. Among the pirate convicts on Kidd’s H.M.S Adventure Galley is Adam Mercy (Randolph Scott), who will turn out to be the son of Lord Blayne looking to clear his name. Also turning up is Orange Povey (John Carradine), a ship’s surgeon, one of Kidd’s cronies whom he had abandoned on a coral reef near Madagascar and presumed was dead, but now threatens if he’s not taken along he has delivered a letter to someone in London who will expose Kidd as a pirate. The socially ambitious Kidd takes along a valet Cary Shadwell (Reginald Owen) to provide himself with the proper etiquette for a man of good breeding (giving the film some comic relief).

At sea Kidd pretends to protect the Quadagh Merchant from pirates, whereby he instead takes as prisoners the passengers Lady Anne Falconer and her father Lord John Falsworth (Lumsden Hare). It then is up to Adam to save the day, as he reveals his true identity to the beautiful Lady Anne after her father is killed. Through Adam’s heroic feats, whereby he turns up alive after Kidd thought he dispatched him, he gets to accuse the double-dealing Kidd of being a pirate and a murderer before the king and the king then sends Kidd to the gallows and restores Lord Blayne’s good name. 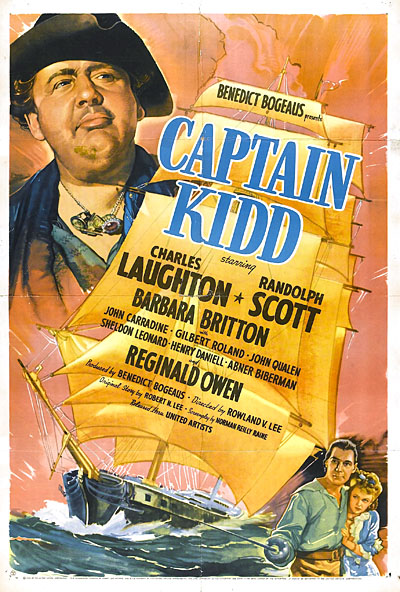