A neglected gem (it bombed at its theater release), with a great ensemble cast carrying the episodic film (the many colorful character actors are a trip). It was silent screen matinee idol John Gilbert’s last film (unable to secure regular work in talkies as it was thought his voice was too high-pitched, resulted in him being an alcoholic and dying at the young age of 41, in 1936, of a heart attack). Gilbert steals the pic from a terrific cast and shows those who doubted his voice were misinformed. Director Lewis Milestone (“Rain”/”All Quiet on the Western Front”/”Of Mice and Men”), Gilbert’s good friend and the reason he got the part, keeps it bouncy as a Grand Hotel (1932) sophisticated comedy thriller that’s set as a seagoing tale.The Columbia big budget film is a showcase for some of the studio’s hot properties. There’s even a non-talking cameo by The Three Stooges (Moe and Curly Howard, and Larry Fine) as band members on the boat, who just signed with the studio. It’s based on Wallace Smith’s 1933 novel, and he writes the screenplay.

Steve Bramley (John Gilbert) is an alcoholic Hollywood reporter who leaves his beloved fiancée Gerta (Tala Birell) in LA to go on the cruise ship the San Capador to New York, as he hopes to give up booze, write a novel and overcome his failure to be a screenwriter. On the boat, he meets his old drinking buddy chief steward Layton (Leon Errol) and starts imbibing.

We soon learn that the misanthropic captain (Walter Connolly) hates the sea and only became a sailor to get out of living at home with his bushy bearded dad. The grumpy taskmaster captain tells reporters covering the story on the ship’s departure that “I detest the sea. I’d like to see any damn-fool women and children beat me into a lifeboat. … I’d break them in two with my bare hands.”

Also boarding the boat is Junius P. Schulte (Victor McLaglen), an ex-sergeant on the police force, now a private detective for his own firm. He happens to be another of Steve’s drinking partners. Schulte is trailing career criminal Danny Chekett (Fred Keating), who stole $250,000 in bonds that Schulte wants to recover. Janet Grayson (Helen Vinson), aka for Michigan Red, travels alone and poses as a proper Boston librarian on vacation, but is really Danny’s lover and crime partner who hides the bonds on the ship.

While Junius is kept busy chasing after the hidden bonds, there are multiple subplots that involve the other passengers: a Latin American general (Akim Tamiroff) returns to his revolutionary stricken country to get revenge on those who killed his El Presidente; a grouchy judge (Claude Gillingwater) smirks at everyone; a wealthy, bossy, loudmouth Park Avenue dowager (Alison Skipworth) forces herself on the younger Checkett until he relents when he realizes that she’s loaded; a former prostitute (Wynne Gibson) now a respectable lady is bullied by her proper husband (John Wray) until she gets her revenge; a bushy bearded passenger (Donald Meek) reminds the captain of his dad and he jostles him like he did dad so his beard falls into his soup;an arrogant retired British army major (Arthur Treacher) who looks down his nose at the others;and the busy bartender (Walter Catlett) who becomes one of Steve’s closest friends.

This is a funny and very entertaining film, one worth seeking out even if it never made it to DVD. 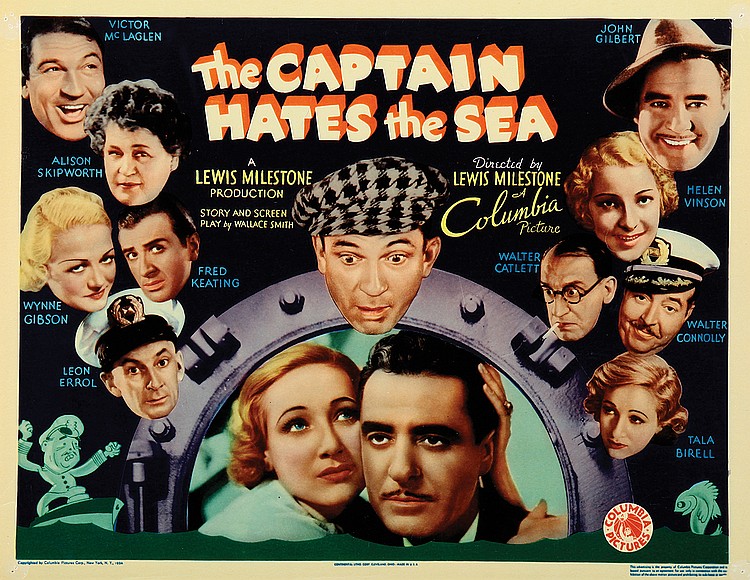