“A below average B western.“

A below average B western. Veteran B film director Howard Bretherton (“Gun Smoke”/”The Trap”) gets no life out of this dull oater. Writers Doris Schroeder and Vernon Smith base it on the 1926 novel by Clarence Mulford. They never get around to developing any real characters with depth.

This one is strictly a shoot-em up western. Hopalong Cassidy (William Boyd) is the sage-like co-owner with the supportive Buck Peters (Howard Lang) of the Bar 20 ranch. Hoppy returns to the ranch (not mentioned where it’s located) after selling cattle in Omaha. Buck warns him that the young ranch hand Johnny (Jimmy Ellison) is hanging around with a bad saloon crowd in town and losing his wages gambling. Hoppy tells Buck he’ll have a talk with him. But before he can, the saloon gang rob Hoppy’s ranch for the cattle money and wound Buck. They frame Johnny for the shooting, but don’t get the money since Hoppy banks it. But then rob the bank after Hoppy’s deposit. The outlaws include Shanghai (George Hayes) and Porter (Alan Bridge). When Porter orders Johnny killed in the hills, Shanghai helps him escape and alerts Hoppy. Shanghai is the father of Linda (Muriel Evans), the girl Johnny loves. 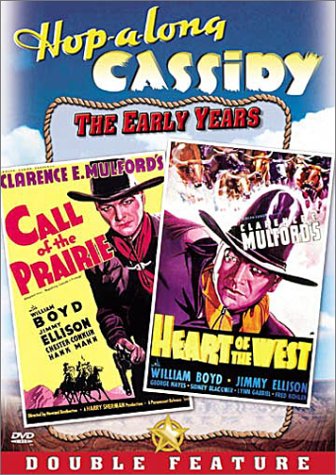