“It left me puzzled at what does all this artifice mean.”

Perhaps another vanity project by director Angelina Jolie(“In the Land of Blood and Honey”/”Unbroken”/”A Place in Time”), who co-stars with her hubby Brad Pitt. The downbeat romantic drama, set in the 1970s, takes place in a posh French seacoast resort (filmed in Malta), where it attempts to study a marriage unraveling in an idyllic setting. The result is a pretty film to look at and a dreary artificial narrative to endure for two hours.

It opens with writer’s block novelist Roland (Brad Pitt) and his miserable-looking former dancer wife Vanessa (Angelina Jolie) riding in silence in their Citröen to a hotel room in a French resort. Most of the movie unfolds in the hotel.

The couple hope the beautiful seacoast setting will restore to good health their failing marriage, but they are numb and feel no joy about anything. A happy newly married French couple (Melanie Laurent and Melvil Poupaud) check into the hotel and their joy strikes a warning chord with the unhappy couple. The insanely jealous Vanessa accuses hubby of making eyes at the young bride. Soon Vanessa starts spying on the young couple through a peephole in the wall of their adjoining hotel rooms. Roland also becomes a peeping tom. Soon the viewer also becomes a voyeur, as there are intimacies shot in both room showing both couples in action.

The character-driven drama is slow-moving and styled in a dream-like way. Where it lost me was that it left me puzzled at what does all this artifice mean, and it further lost me because I found it hard to care about the long-suffering couple. I can appreciate the effort to make it an anti-Hollywood melodrama, but it just doesn’t feel right as an art-house film with much pretense to being a Sirkian melodrama. 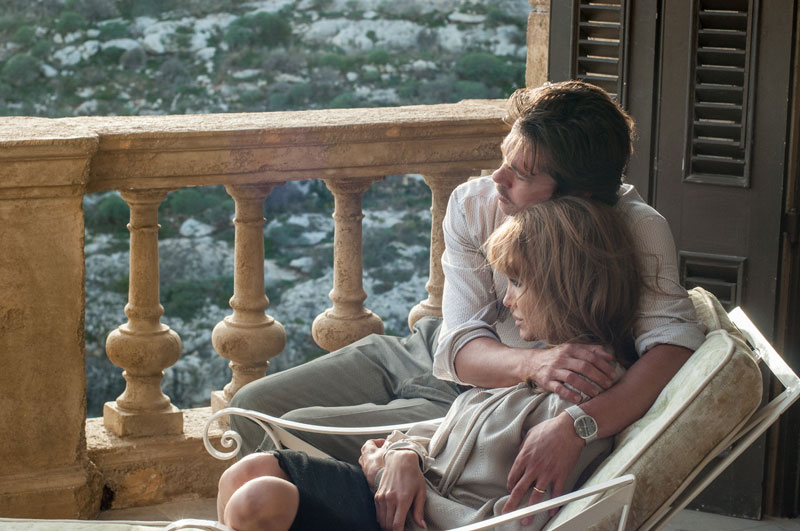