“I think the film’s most notable achievement is that it somehow survived the Communist censors.”

This is the only narrative feature made by painter and documentary filmmaker Jürgen Böttcher. It was banned before its “official” release in 1966 by the East Germans because of its sexually frank subject matter and for not being “meaningful,” and not over anything political. It was never officially released in Böttcher’s homeland until after reunification in 1990.

It’s a tale of love and disillusionment between a young couple, married for only two years, who are trying to come to terms with their differences. There are supposed influences by both the French New Wave and Italian Neo-Realism movements, in this slow moving arty presentation that has a few lingering enlightening moments but through no fault of its own there’s something vital missing from it that takes away most of its intended power. The film never received the ending Böttcher intended because the State censors didn’t allow him to finish the film and even the “official” print that was screened during the 1990 Berlin International Film Festival was actually the same old unfinished print meant for the East-German Communist party censors (and the same film I saw on this DVD).

Al (Rolf Römer) is a hardworking but unambitious auto mechanic, his wife Lisa (Monika Hildebrand) is a very attractive, sweet and dedicated hospital nurse. They live in a cramped one-room apartment in Berlin, and both feel something is missing in their marriage. Al talks things over with his caring 70-year-old artist neighbor Mogul (Paul Eichbaum) before he moves back to his working-class parents’ house. Nothing much really happens, as Al roams a spotlesly clean East Berlin eyeballing some lovely women and hanging out with his motorcycle riding pals. Lisa tries to find her bearings, now that she’s separated, but is depressed and unsure of herself in her new status. The suspense is whether these two nice people will get back together, as almost everyone they know thinks they should.

It was difficult for me to find anything about this film that was controversial, but that being said it certainly rubbed the East German censors the wrong way. I think the film’s most notable achievement is that it somehow survived the Communist censors and gives us a peek at a dreary East Berlin and at a few regular folks at the time of the great divide that are easy to identify with. 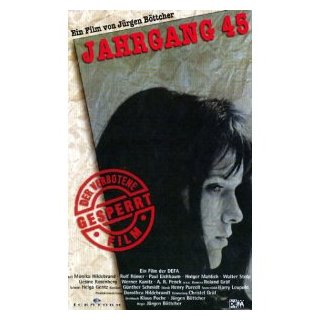 I USED TO GO HERE