Under performing Queen biopic is flatly helmed by Bryan Singer (“X-Men”/”The Usual Suspects”), who was fired before completing the film and replaced by the executive producer Dexter Fletcher.

Anthony McCarten writes it by the numbers. It chronicles the rise to the top of the rock world by Freddie Mercury (Rami Malek), the flamboyant, bi-sexual, frontman for the British rock group Queen. Freddie succumbed to AIDS in 1991.

The title is derived from the risky six-minute, genre-breaking song from the group’s center-piece big 1975 album entitled A Night at the Opera.

Born with four extra incisors in Zanzibar as Farrokh Bulsara of Parsi descent, where his parents landed after forced out of Egypt, and then at 18 coming to England with his family as immigrants. In 1970 the future rock star was a baggage handler at Heathrow Airport. He soon changed his name and co-founded Queen with guitarist/astrophysics scholar Brian May (Gwilym Lee) and drummer/dental student Roger Taylor (Ben Hardy). Bass player John Deacon (Joseph Mazzello) soon joined the band. Mercury is pictured as a lover of cats, shy off stage but sexually strutting on it, ego-maniacal and struggling in his love for Mary Austin (Lucy Boynton) as he becomes increasingly enamored of men (his steady is the conniving manager played by Allen Leech). The tiresome conventional biopic keeps things tame, even when the hedonistic gay party-giver gives orgies. I’m no fan of Queen’s music, but the music was better listening to than the banal story–impertinently telling little about the band and focusing entirely on Mercury. Freddie reached big-time success across the world with hit songs like the title song, We Are The Champions, Somebody to Love, Radio Ga Ga, Killer Queen, Don’t Stop Me Now and We Will Rock You.

When the band broke up, Freddie went solo. He reunited with the band in a heralded 20-minute appearance at the 1985 Live Aid concert from London’s Wembley Stadium. Even though I found the film lacking, at least Rami Malek’s performance is on the money capturing the singer’s outward look. 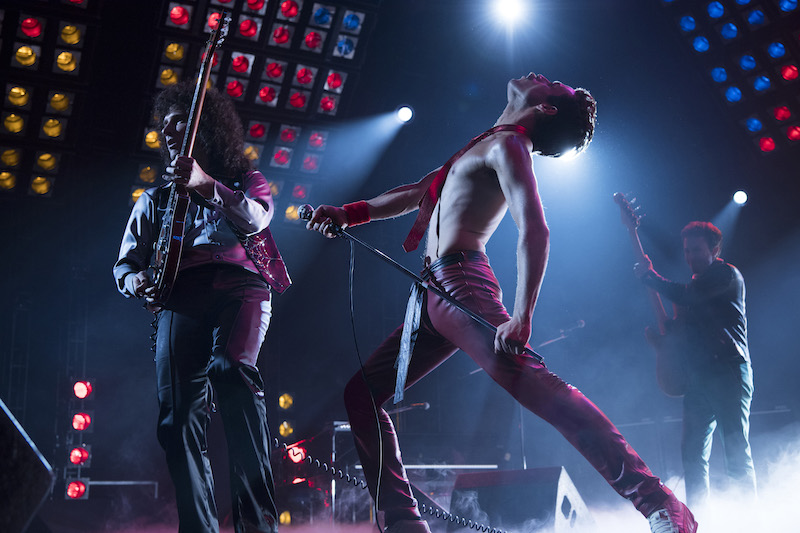