“Though a bad film, it made for stupid entertainment.”

Bill Rebane(“Maggots”/”The Giant Spider Invasion”) is a second-tier director, who never made a worthy film. His exploitation slasher film is based on a story by Chris Vaalar & William Arthur. It’s written by Ben Benson & Emil Joseph. The reason for watching is the loony performance by the iconic singer Tiny Tim, in his first dramatic role, known for his ukulele playing, falsetto voice and his signature song of “Tiptoe through the Tulips,” who plays the brain-damaged and suspected serial killer clown Marvelous Mervo. Tiny died in 1996.

The film was made in Wisconsin on Rebane’s Shooting Ranch Studios, where he also made his other films (but after this film he had a stroke and lost the ranch).

College student Jill (Itonia Salochek) comes home to her small Wisconsin town and finds her much hated farm evictions banker father has vanished. There are other killings, and all the deaths are related to farm foreclosures. All the vics are slit like pigs and hung up-side down in the villain’s barn.

Even if Jill has a new boyfriend (Peter Krause) she is chased after by Gary (Dean West), her ex-boyfriend. He is the brother of the mentally challenged clown Merv (Tiny Tim).

We soon learn that Gary is not the nice guy he pretends to be, but wears a stocking mask and is the killer villain.

There’s a nude scene with the attractive Jill, the killings are graphic, there’s an uplifting number from Tiny over the end credits and a comic-relief role played well by Frank Benson as the sheriff.

Though a bad film, it made for stupid entertainment. 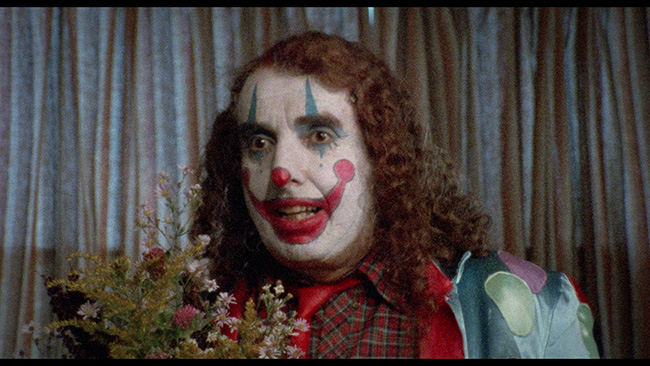 WAY OF A GAUCHO

WAR OF THE WORLDS, THE