“A mediocre film that has earned a rep for wasting an all-star caliber cast of some of the greatest horror actors.“

Austrian-born contract director Reginald LeBorg (“The Mummy’s Ghost”/Jungle Woman”/”Diary of a Madman”), known as a horror film director who never liked the genre and therefore made mostly horror films that had no heart, turns in a dull, humorless and gruesome snoozer in The Black Sleep. It’s a mediocre film that has earned a rep for wasting an all-star caliber cast of some of the greatest horror actors (Bela Lugosi, Lon Chaney, Jr., John Carradine, and Tor Johnson; Basil Rathbone and Akim Tamiroff were also featured and though not necessarily horror actors they often took roles in the genre). The film was never taken seriously by the filmmaker; it was shot in a rush over 12 days and had a budget of under a half-million dollars. The screenplay was written by John C. Higgins from a story by Gerald Drayson Adams.

In the Victorian London of 1872, Dr. Joel Cadman (Basil Rathbone) frames his brilliant scientist student Dr. Gordon Ramsay (Herbert Rudley) for the murder of a moneylender named Curry (Tor Johnson) so that he can administer to him an eastern potion called the “black sleep” that will enable him to feign death before he is hanged and thereby Cadman will have him survive the hanging and as promised by the court will be allowed to take back his body for burial. Instead the mad doctor takes a revived Ramsay back to the lab to help him in his diabolical brain surgery experiments. Ultimately the obsessed Dr. Joel hopes to learn a way to cure his comatose wife’s tumor, as he anesthetizes his experimental subjects before doing the unorthodox operations on their brains. The most challenging scenes feature a suspicious Ramsay assisting as Cadman operates, and soon discovers that the man he supposedly murdered is still alive thanks to the eastern potion and that there are others in the dungeon also alive and kept locked up for further experiments.

Warning: spoiler in the paragraph.

Bela Lugosi plays the thankless role of Cadman’s mute servant, a part that calls for no dialogue and not much to do. This was the wasted looking and morphine addicted Lugosi’s last role in a regular feature (there’s some footage of him added to the home movie of Plan 9 from Outer Space after he made this film). Lon Chaney Jr., overweight and unfit to act because of his alcohol problem, is cast as Mungo, a once brilliant scientist now deranged because of Rathbone’s cruel experiments and only able to be controlled by surgery nurse Daphne (Phyllis Stanley). Mungo even attacks his daughter (Patricia Blair), who will eventually elicit the help of Ramsay to escape this madhouse. John Carradine is so deranged from the experiments that he imagines himself in the 12th-century fighting the Saracens and yelling “Kill the infidels!” That absurdity serves to work itself out as the plot device on how Rathbone will get his comeuppance from those he ruthlessly tortured. Akim Tamiroff plays it up hammy as a gypsy peasant carrying on shady dealings with Rathbone.

At least it was better than the director’s “Voodoo Island,” which starred Boris Karloff in supposedly his worst film. 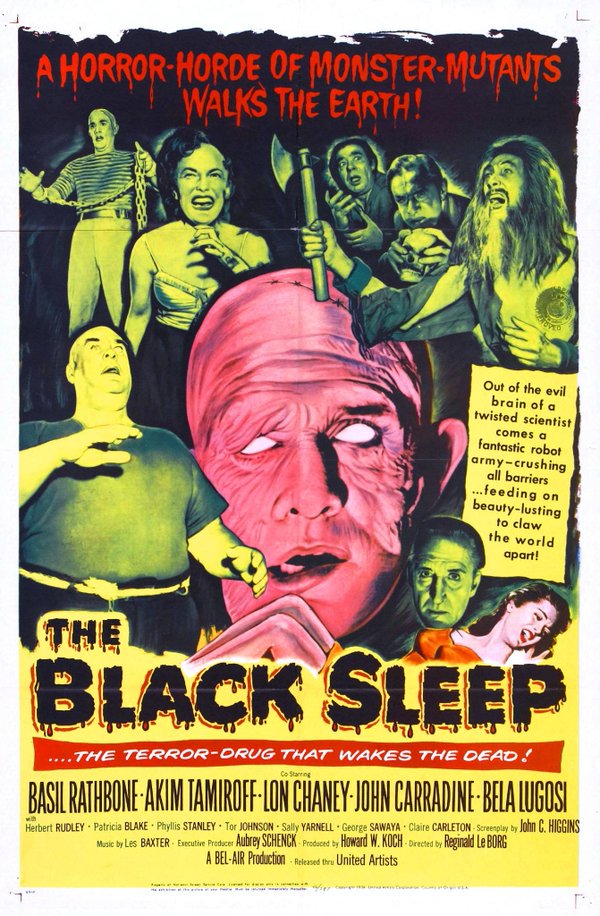