“It builds a compelling case to show the negative results of capturing and confining such noble creatures as the blackfish.”

Gabriela Cowperthwaite’ (“City Lax: An Urban Lacrosse Story“) well-shot no frills documentary points a finger at Sea World for its cruel and unethical policy of kidnapping baby killer whales, separating them from their families and keeping them captive in harmfully claustrophobic conditions. The muckraking documentary draws on interviews from former disgruntled Sea World orca trainers and video footage. It builds a compelling case to show the negative results of capturing and confining such noble creatures as the blackfish, and having them live as prisoners so they can be used for entertainment.

The story centers around a 12,000-pound male killer whale, Tilikum, who has killed three people. A researcher-activist tells us that in the wild the animals are friendly, never attack people and live longer. In captivity, they can become psychotic because of the oppressive conditions. They can even become killers, as witnessed by the killing of the experienced trainer Dawn Brancheau by Tilikum in Febuary 2010, in Orlando’s Sea World.

The pic profiles Tilikum after his insensitive capture and separation from his family in 1983 and his 1992 abuse at the now-defunct Canadian theme park in British Columbia called Sealand of the Pacific, which led to the tragic death of the young Sealand trainer, Keltie Byrne and subsequent transfer of Tilikum in 1992 to Orlando’s Sea World. The theme-parks covered up the killing by calling it an accidental death due to slippage, when eyewitnesses tell us the trainer slipped in the water and Tilikum refused to let her up while two female orcas circled them.

We are clearly left with the impression that there’s government laxity in enforcing animal rights and that it would be best if these intelligent and well-behaved creatures were left in the wilds and not part of the Sea World custody. The giant theme-park’s best answer to the trainer’s death is to falsely blame everything on trainer error, while park executives refused to be interviewed–denying any culpability as exploiters of the mammals. 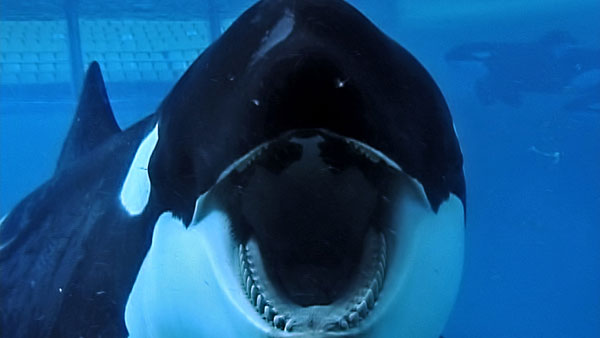 HAWKS AND THE SPARROWS, THE