BIRDMAN OF ALCATRAZ, THE

The acting by Burt Lancaster as the mentally tortured prisoner and Karl Malden as the vengeful warden, provides the film with brilliant performances. This factually based true story about Robert Stroud (Burt Lancaster), who served a 53-year imprisonment (forty-three years were spent in solitary confinement) until released at the age of 72. It’s based on the 1955 book by social worker Thomas E. Gaddis and written by Guy Trosper.

Originally sentenced to 12 years imprisonment for killing a rapist in Alaska in 1909, Stroud forfeits his parole over a prison knifing and is later sentenced to death while in Leavenworth Prison, where he murders a prison guard who refuses to let his overwrought mother Elizabeth (Thelma Ritter) visit him. Stroud has an obsessive love relationship with his mother, who visits President Woodrow Wilson and persuades him to commute Stroud’s sentence to life imprisonment. The swarmy prison warden, Harvey Shoemaker (Karl Malden), intends to keep him for the rest of his life in solitary confinement.

Life takes a different turn for the twisted criminal when he finds a wounded sparrow and takes it to his cell to secretly nurse it back to health. This leads him to a passionate study of birds (especially of canaries) until he becomes an self-taught ornithology expert and writes a textbook on avian diseases. When Warden Shoemaker is replaced by a more lenient warden, he’s allowed to openly keep the birds as pets. Stroud wins a prize in a magazine competition and as a result is visited by lonely frumpy widow Stella Johnson (Betty Field), who suggests that they manufacture his remedies. When prison philosophy about inmates keeping pets is reversed, Stroud finds a loophole in the law that allows him to marry Stella while in solitary confinement. This gets him media publicity nationwide, and he’s allowed to carry on his studies. But he’s soon transferred to Alcatraz and discovers that his old nemesis Shoemaker is warden, who informs him he can’t keep his birds anymore. Instead Stroud writes a book on penology. When the reformed Stroud acts as a peacemaker in a prison riot, he’s transferred to a minimum security farm at Springfield, Missouri.

Frankenheimer does the best he can with this sometimes heavy-going melodramatic material. Joshua Logan was originally slated to helm it but it was turned over to producer Jack Cummings, who dropped out after encountering resistance from the U.S. Bureau of Prisons. The next choice for director was Brit filmmaker Charles Crichton, known for his comedies, but he couldn’t cut it and was fired after a week of filming. Under Lancaster’s influence Frankenheimer, who directed the star in The Young Savages, came on board and shut the pic down for a year to have it rewritten. Lancaster spent the time filming Judgment at Nuremberg. 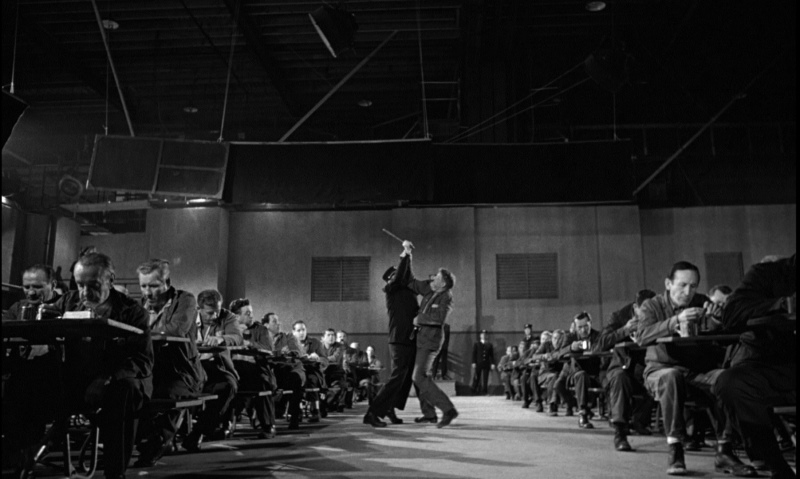