“A matter-of-fact funny and clever in-depth look at steroid use in modern-day America.”

A matter-of-fact funny and clever in-depth look at steroid use in modern-day America told from a personal slant by the 33-year-old bodybuilder and power lifter, the first-time director Christopher Bell, who tells us as a child he had a low self-image as a “fat pale kid from Poughkeepsie” until he took up bodybuilding without using steroids (Chris uses himself and his two brothers as an example of the lure of steroid use). He was raised with his two chubby brothers by his working-class parents and idolized Hulk Hogan, Arnold Schwarzenegger and Sylvester Stallone, who advertised themselves as examples of clean living, and he was influenced by them to be a bodybuilder to gain self-respect. Believing his role models never took steroids he followed their clean living example, until learning that all his heroes indeed did take performance enhancing drugs. When older he also found out his once drug-free brothers now were juicers–his younger brother “Smelly” does it for power-lifting tournaments and his older brother “Mad Dog” does it to see if he can get a lucrative professional wrestling contract with the WWE.

Chris conducts interviews with a host of famous figures involved on either side of the steroid controversy (from the world of sports, politics and bodybuilding) and questions its bad rep and the myths about being a juicer and what actually is cheating in sports when you look at things objectively. Bell narrates the film in the same probing and entertaining way as would a Michael Moore or Morgan Spurlock. After debunking the health issues associated with anabolic steroid use raised by so-called medical experts and for double talking politicians singling out steroids as a dangerous drug without offering proof, his conclusion is that the use of steroids is rooted in the competitive nature of Americans who believe in getting the edge on their rivals any way they can (hardly any one wants to be an “Average Joe”) and that true research is needed before labeling this drug as a killer or responsible for such things as ‘roid rage. I concur, real medical research (which hasn’t been done) is needed to settle this controversy that has dangerous implications for competitive athletes, gym rats and America’s idolizing youth. Unquestionably the public needs more real medical research to determine for certain whether steroids are safe or dangerous, as this film can’t answer that big question (even though it does the best it can with the info that’s out there). Someone other than the well-meaning but emotionally charged up Chris needs to collate the info collected in a fair way so the viewer doesn’t get caught up in all the entanglements, controversies and spiels about steroids that can only leave the innocent onlooker slightly bewildered about whose telling the truth. What the film firmly establishes, is that merely vilifying steroid users or passing laws that might not make sense or sanctioning political witch hunts over drug users or just blindly taking steroids without knowing too many answers, is not the most sensible thing to do. Chris exposes a hypocrisy in our pop culture society that encourages the taking of steroids for those caught up in a bad American Dream that blinds them to reality and impels them to foolishly keep up with the Jones’. Whereas we learn that many of the top sports figures allegedly or definitely used steroids (like baseball players Barry Bonds, Mark McGwire, and Jose Canseco and Olympians Marion Jones and Ben Johnson) and received great financial rewards and fame until they were caught or suspected of such use, while other celebrities like Schwarzenegger and Stallone got a free pass even after admitting they used ‘roids. 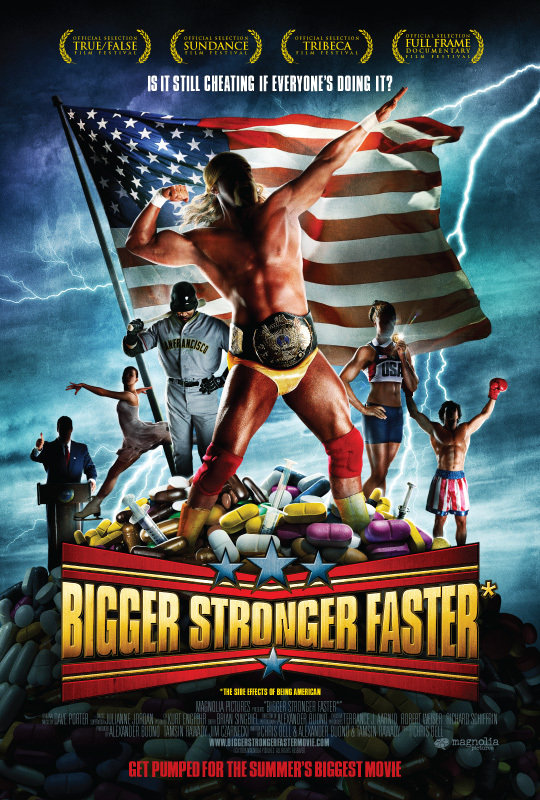