BETWEEN MIDNIGHT AND DAWN (aka: PROWL CAR)

Between Midnight and Dawn is an undistinguished crime drama shot in a semidocumentary style with a voice-over. It’s efficiently directed by Gordon Douglas and is adapted by screenwriter Eugene Ling from an unpublished story by Gerald Drayson Adams and Leo Katcher. The action takes place in Los Angeles. The heroic men who ride in the prowl cars are featured, with the narrative centering on marine wartime buddies, the intense Dan Purvis (Edmond O’Brien) and the easy going Rocky Barnes (Mark Stevens), being radio patrol partners and roommates. The cynical, slightly older and more experienced Dan, considers all criminal types to be “scum,” while Rocky has a more generous attitude.

The film follows the cop team covering the mean streets of L.A. at night and in their first actions we see them act in a professional manner in breaking up a robbery by four teens and then arrest to no avail a local hood who is intimidating a frightened restaurant owner by throwing a bomb through his window. But the restaurant man is too scared to identify him. Rocky fantasizes that the velvet voice of the new girl they hear over their police radio can’t be anything but beautiful, and is aching to meet her. They learn she’s been assigned to their boss, Lt. Masterson, and she’s indeed a cutie pie and that her name is Kate Mallory (Gale Storm). They corner her and learn further she’s the daughter of a police lieutenant who died on duty. They pester her for a date, and both take her to dine in an underworld nightclub run by the ruthless young gangster Richie Garris (Donald Buka). While there they observe a big-time mob gangster, Leo Cusick, in the club talking to Garris. The police intelligence reports that there’s a trouble in the air between these two, as organized crime is trying to force loner Garris into a partnership. The gang war erupts when Garris and his boys kill Cusick. After a wild police chase through the nighttime streets of downtown, the boys arrest Garris. This results in Garris’s conviction for Cusick’s murder and he is sentenced to die in the electric chair. When taken away from the court, Garris threatens to get even with the arresting officers. Garris escapes with the help of his gang, and soon acts on his threat promise by fatally plugging Rocky. Kate was set to marry him, and now teams with the embittered Dan to locate Garris. Dan has nothing but contempt for Garris’ girlfriend, a torch singer in the nightclub, Terry Romaine (Gale Robbins), and tries to beat it out of her where Garris is hiding. This brutish action draws a severe rebuke from Kate.

It leads to an action-packed finale, where the police have Garris trapped in Terry’s apartment after a stakeout. But the vicious Garris uses a child as a shield to foil the police. In a daring move, Dan uses the fire escape to climb up to the window of Terry’s high-rise apartment and tosses in a tear-gas bomb. His actions save the young girl, but Terry gets it when she steps in front of a bullet intended for Dan. Then Dan kills his nemesis, and changes his mind about his ill thoughts of Terry.

Though beset with a weak script, Douglas does a good job handling the action scenes of Rocky getting blasted by a Tommy gun from a passing car and in the final showdown in which Dan manages to take out the psychotic Garris. It offers a filmmaker’s grandiose interpretation of urban life, as the cops are idealistically shown only as valiant in their efforts to stop crime. Certainly not a picture with any depth, but it buzzes through the city streets with much appeal and its ordinary romance story holds together through the playful banter amongst the three. The romance becomes more affecting when it is contrasted with how dangerous are the lives of these ordinary but heroic men. 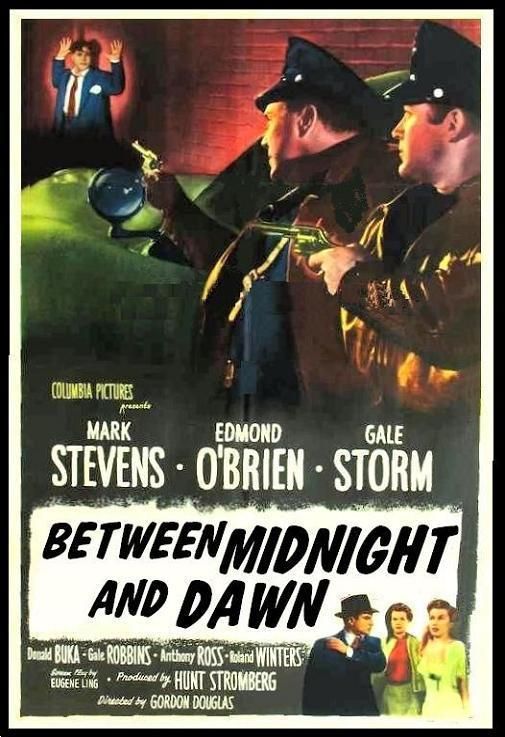