“A powerful and unpredictable film.“

Writer/director Justin Lin’s nihilistic Better Luck for Tomorrow is a disturbing look at an upscale suburb of Orange County, California, and its high school where an amoral group of academically high achieving Asian Americans who go against type to get involved in an escalating series of crimes. They start with school cheating scams and computer thefts and gradually work there way up to murder. The largely unknown ensemble cast, all Asians in starring roles, are low key and just superb. The whites play the adults and have small roles. Lin’s friends Ernesto Foronda and Fabian Marquez helped with this probing script, that plays in a bold way with variations on ambition and success. Where money is the yardstick of measuring success, and fitting in means finding a niche in the mostly white community and building up a reputation. The film examines some Asian-American students who are overwhelmed by the influence of hip-hop, sports heroes, and peer pressure, and feel compelled to strive for even more success in their totally American experience.

The film revolves around a highly motivated and industrious high school senior named Ben (Parry Shen), an all-American type of teenager, who is an efficient worker at a part time fast food place, reads the dictionary everyday to learn a new word, made the basketball team, shines on the Academic Decathlon team and on charities such as the beach cleanup and the food drive. He’s always busy, but even more so when working overtime at a balancing act between honesty and fraud. His resume should qualify him to join the corporate greed frenzy whenever he makes his career move. Ben is frustrated because he has no girlfriend and is still a virgin, but he’s graduating near the top of his class and thinking Ivy League college. But things become too confusing when he gets drawn into the powerful American pop culture scene and gets deeper into dark things than he ever imagined, and his fascination with the gangsta pose has worn off but he remains stuck because he has no value system to fall back on. Ben also acts as the narrator, and explains his ticket for freedom comes because he gets top grades and therefore his parents assume everything is fine and leave him alone.

The film’s opening scene has the almost perfect senior Ben and his brilliant but socially awkward and unstable best friend Virgil (Jason Tobin), interrupted from their casual chat while sunbathing by the cell phone ringing on a body buried in Virgil’s backyard. The film goes into a flashback back to Ben’s freshman high school year to clear up whose body that is, as it describes how the four overachieving sons of Chinese immigrants, the “model minority,” known for scholastic achievement, hard work, and solid behavior, end up on an unexplainable troubled path. No parents are shown, as the teens are left unsupervised. The viewers only clue about what might have gone wrong is from watching them futilely search without guidance for their real identities.

Virgil’s older cousin Han (Sung Kang) is more physical than brainy, whose tough-guy presence is needed as they pull a switchover in a computer store and later rob the school of new computers. The older Daric (Roger Fan) is the personable but malcontent school editor and debating team leader, whose cool way of life is to always find an angle so he can beat the other guy. He sells a homework cheating sheet that Ben and Virgil work on for those in need of underhanded academic help. The four wannabe somethings hookup and become notorious scam artists, and get mysteriously known as the Chinese Mafia. They all love that image and take it with them to their secret piggy banks, where they relish the illegal coin they really don’t need and all the parties they get to attend and all the fame that comes their way. They also enjoy cruising in their red Mustang, which is totally a southern California luxury thing for teens to do.

Karin Anna Cheung plays the ideal pretty teen sweetheart Stephanie, the A student and cheerleader and the object of Ben’s affection. But she is dating the wealthy and self-confident and arrogant Steve (John Cho), who is a ladies man attending the local private school so he mingles with a different social crowd and Stephanie is unaware of his deceptions. Ben’s dilemma is that he doesn’t know how to express his love for her, as he’s wracked by a social insecurity and later by a drug problem (he takes the drugs to keep awake to do homework). Stephanie likes Ben as a friend but doesn’t love him, as she’s turned on by all the hype she’s been brought up with and yearns only for the psychologically darker Steve. We get a glimpse of Stephanie’s white brother, and we therefore assume she’s been adopted. She mentions that some day she would like to meet her real parents, but doesn’t seem to be too concerned as she thinks of herself as just being American.

This brilliant film is hard to categorize because it’s not just an ethnic thriller or comedy or romance or coming-of-age film, but an American original taking off in many different directions. The cast might be Asians and they expose the viewer to the Asian experience, but it’s primarily an American story about real people who can’t be apologized away. They are who they are and the viewer must see them as not only Asians, but as Americans wrestling with typical suburban issues of alienation and identity and violence. The film might have an Asian American perspective, but its theme is a universal one. The teenagers featured might upset many in the Asian community and how the film ends might be shocking, but what’s really refreshing is that there are no set stereotype figures or earnest messages sent. This film breaks that ugly mold for teen films. If by not compromising its characters it alarms some that Asians have rooted themselves in the American experience and sometimes take a wrong turn, I think that’s a healthy thing to do. Asians are capable of participating fully in the American Dream and taking any role in it — good or bad. Justin Lin is a talented director, and has created a powerful and unpredictable film–one of the better overachieving teen flicks. 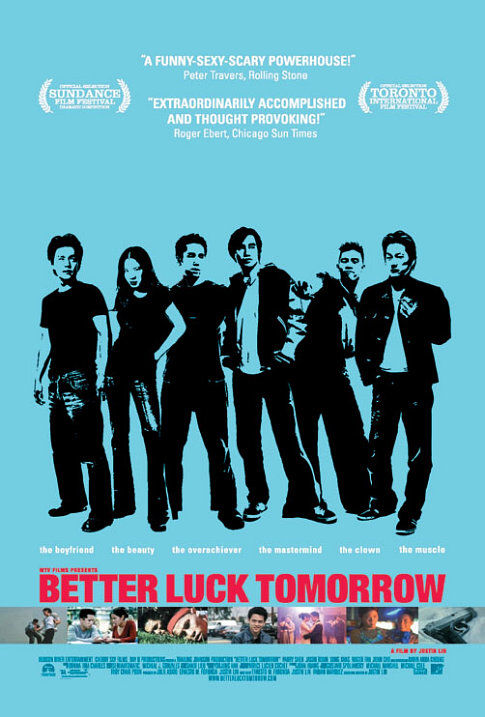